Tommy Staggs to unveil a ‘new sound’ with Demetree

At the age of 11, Tommy Staggs’ life was forever changed. His very best friend, Scott Franks, was killed in an airplane crash.

Like losing part of himself, that event is the single most important occurrence to guide Staggs to where he is today. He realized at an early age how fragile life is and that you only have one life. Do something with that life.

Having appeared several times in the amazing Scrooge Christmas production presented by Kingwood Church, playing the parts of Tiny Tim and young Scrooge, Skaggs was recognized as a talented youngster early on. At the age of 13 he began to really see music as his passion.

A Kingwood High graduate, Staggs met his wife, Kelly Kimbrough, at church. He says the first thing he noticed were her gorgeous eyes. He said “She is an incredible mom to Will, age 7, and Ella, age 8 months, plus she fully supports my love of music. What a blessing my family is to me.” 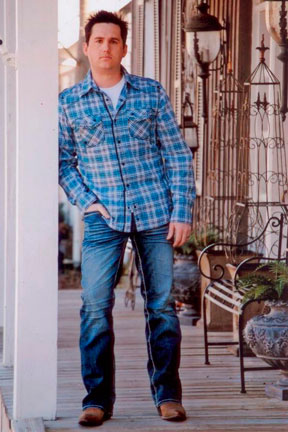 Alabaster resident Tommy Staggs has been performing with his band, Demetree, for several years and was recently signed by a Nashville-based recording company. (Special/Sandra Thames)

At Kingwood Church, the original minister of music, Ronnie Freeman, was friend and mentor to Staggs. Freeman worked with Staggs from his early teens (in vocal competitions) and then helped him to find work in Nashville in 2001. In 2004, they returned home from Nashville due to work scheduling and a new baby. In 2007, not one to give up his dreams, the family returned to Nashville.

Now signed with SSM Nashville as a writer and artist, Staggs is part of the trio Demetree (signed in December 2010) and has a single coming out later this year.

Right now that trio is on tour and will be performing at Razin’ Kane on Thursday May 5 at 7 p.m. (621-6994 for tickets) to allow all of us to see how far our local, young singer has come. Branch and Dean (another group) will share the program.

Lots of his Shelby County friends are anxious to hear his new sound.

Tommy Staggs works for Hearing Planet in Nashville and hopes someday to achieve his heart’s desire in the music field.

Son of Reba Staggs Green of Alabaster and Pete Staggs of Mobile, Tommy has a younger brother, Matthew. (Also a “Scrooge” graduate).

For his children, he prays for their happiness, salvation and the “grit” to fulfill their own dreams.

Craig Yancy is always there

By SANDRA THAMES / Community Columnist It’s Easter! Let us rejoice! One of my favorite songs says “When He was... read more