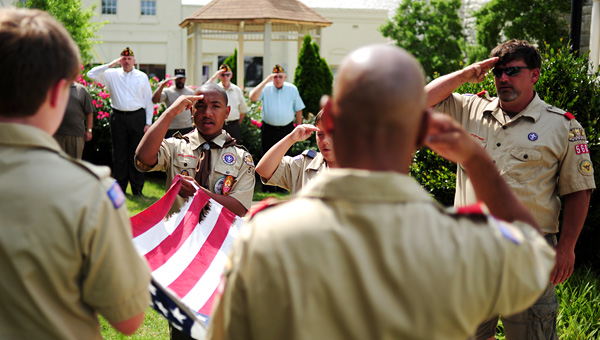 The old, torn flag was burned, and a new flag was raised in its place.

Mike Northcutt, commander of American Legion Post 131, said he was thankful for the help of the scouts.

“American Legion has always partnered with the scouts, and helped them with their flag education,” Northcutt said. 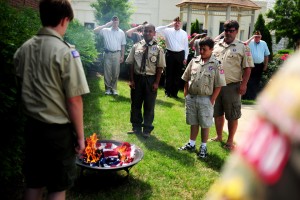 Nickolas Chapple, left facing, reacts to the smoke from the flag being retired during the ceremony. (Reporter Photo/Jon Goering)

Troop 560 Scoutmaster Sid Wheeler said the ceremony was beneficial to the scouts in a couple ways.

“It gives them a chance to learn to do a little civic duty,” Wheeler added.

“We’ve had about a 20-year absence here in the community,” Northcutt said. “This is our chance to regroup with the scouts. We’ve been gone. We’re coming back.”

Post 131 had become inactive through the years, he said. 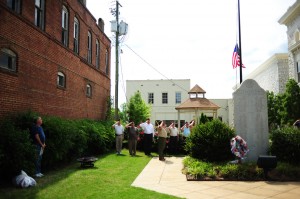 At the end of the ceremony, the new flag is raised, then lowered to half-staff in remembrance of those affected by the April 27 tornadoes. (Reporter Photo/Jon Goering)