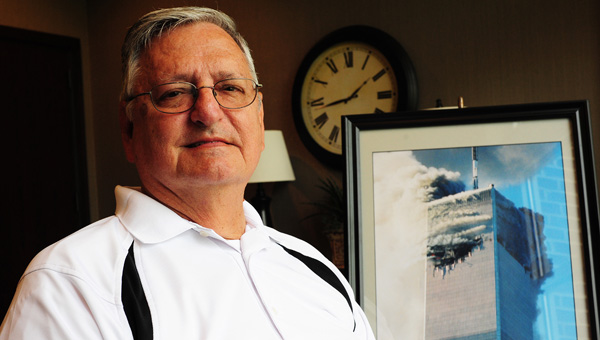 Chelsea Mayor Earl Niven sits with the photo he took of the World Trade Center on the morning of 9/11. (Reporter Photo/Jon Goering)

CHELSEA – Chelsea Mayor Earl Niven was in New York on 9/11.

Niven was on a tour bus four blocks from the World Trade Center when the second hijacked airplane hit nearly 10 years ago.

Niven, like many around the world, learned late Sunday night that Osama bin Laden, mastermind of the 9/11 attack, had been killed in a raid by U.S. forces in Pakistan.

“You sort of have mixed emotions, especially for the people that were involved (on 9/11) and lost loved ones,” Niven said Monday morning. “It’s a closure, I think, for them, even though we still have wars going on.

“It’s closure knowing that the main person that was in charge of the attack on America had been found and destroyed.”

Back in 2001, Niven, wife June and 45 others from the Senior Adults program at Liberty Baptist Church were on a 10-day tour of various locations in Canada and the Northeastern U.S.

The group was scheduled to tour Ellis Island and the Statue of Liberty on September 11, Niven said. The itinerary called for the group to leave the hotel at 8 a.m. that morning. The group had been out late the night before and pushed their departure back 30 minutes.

“God was telling me to leave at 8:30,” Niven said. “That’s very important because at 8:30 when we left and we saw the attack, we were on the side looking at the attack, instead of being on the opposite side of the building where all the debris and everything was falling. We had to stop.”

The tour group saw the second plane hit, and Niven said it took 45 minutes to get the tour bus turned around and headed back to the hotel.

“The thing that we did immediately after we turned the bus around, in route back to the hotel, we pulled over and parked and had a prayer,” Niven said.

Niven snapped a photo of one of the towers. “The face of Satan,” he said, is visible in the smoke billowing from the tower. 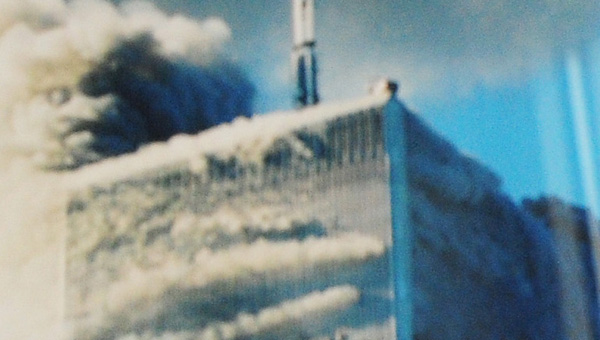 Niven said the "face of Satan" is visible in the top left corner of this photo he took of the World Trade Center on the morning of 9/11.

The group watched the Twin Towers collapse on TV from the hotel.

“The afternoon was sort of dead,” Niven recalled. “There was no leaving the city or coming into the city. We were sort of isolated to our rooms. There was a lot of confusion with our people. I was very concerned about them, because we had people 85 years of age on the trip.

“I tried to keep them busy and not just dwell on what was going on.”

“The one bridge that was open was the George Washington Bridge, and that was the one we needed to leave to come home,” Niven said.