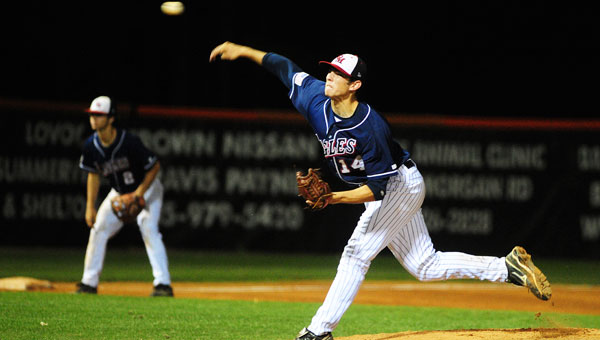 The Oak Mountain High School baseball team took the opening game against Hoover in a best-of-three series in the second round of the Alabama High School Athletic Association Class 6A playoffs, but the Eagles couldn’t clinch the series following a loss to the Bucs in the nightcap of a doubleheader May 2.

Oak Mountain (23-16) will face Hoover in the deciding third game of the series May 4 at 6 p.m. The original date of the game was May 3, but the game was postponed due to rain.

The Eagles racked up 14 hits in a 11-9 win over Hoover in the first game of the series.

John David (J.D.) Crowe led Oak Mountain as he finished 3-for-5 at the plate and drove in two runs. Vince Lubresky homered in the victory.

Jake Hubbard earned the win on the mound after finishing with seven strikeouts in six innings. Pinegar struck out one batter as he picked up a save in one inning in relief.

The Eagles fell to Hoover 5-2 in the nightcap.

Crowe led Oak Mountain as he finished 2-for-4 at the plate. Quinn added a two-run homer in the defeat.

Robby Clements took the loss on the mound.