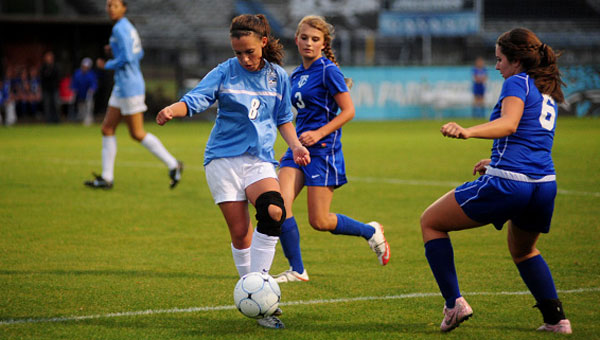 Starr’s Jaguars each bought a T-shirt to give to their Tuscaloosa County counterparts with each school’s logo underneath the heading “Alabama United” and Spain Park provided their foes with a post-game meal following a 9-0 win over the visitors in the opening round of the Class 6A playoffs.

The two-time defending champions had an eight-match postseason win streak on the line, but the action on the field took a back seat to the heartfelt sympathy the Jaguars had for their opponents, who came from one of the hardest hit parts of the state in last week’s outbreak of severe weather.

“We tried to let (Tuscaloosa County) know we’re thinking about them,” Starr said.

Starr’s Jaguars took care of business early with four goals in the opening half to take a 4-0 lead.

Lakin Eddy scored the first goal with her free kick from 35 yards out just 13 minutes into the contest. Simone Charley pushed the Jaguars’ lead to 2-0 with her goal just four minutes later.

Madeline Hughes and Annalika Steyn added goals late in the first half to push the Spain Park lead to 4-0 at halftime.

Spain Park goalkeeper Schyler Arnold scored her first goal of the season on a penalty kick with 35 minutes remaining after Charley was tripped up in the penalty box.

Marie Blunt and Rachel Ferrell capped the scoring for Spain Park with one goal each.

The Jaguars shut down the Tuscaloosa County attack. The Wildcats had only two scoring chances offensively, with Arnold making one save and the Spain Park back line clearing the ball away on a corner kick.

Spain Park will take on Class 6A, Section 6 foe Mountain Brook in the second round of the Class 6A playoffs May 6 in their next stop on the path toward a third-consecutive state title.

FROM STAFF REPORTS University of Montevallo senior Emily Gibson became the first golfer in school history to advance to the... read more