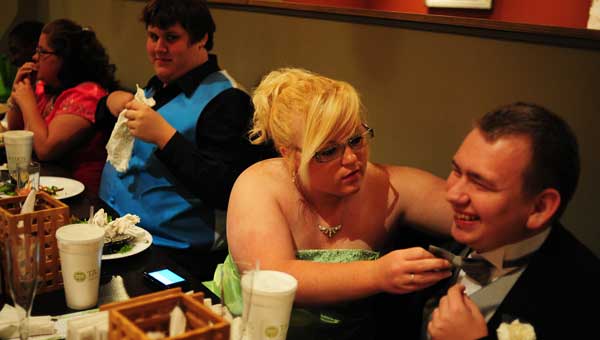 COLUMBIANA – Excitement buzzed in the air the evening of April 30 as a group of Shelby County High School students gathered in front of the courthouse in tuxes, tails, sequins and taffeta.

The students giggled amongst themselves as parents hovered around the outskirts of the group taking pictures of every dress, every couple and every smile.

To any outside observer, this group was just another bunch of high school students headed to their senior prom. However, for this group of students, it took an entire community pulling together to make this night possible.

Among the group were students with moderate to severe mental disabilities, physical handicaps and financial need. Many were students from Mary Lowery’s special education class at Shelby County High School. Earlier this year after Lowery realized several of her students were not able to attend prom due to social and financial limitations, she organized “prom pals,” a group of volunteers to sponsor every aspect of the students’ prom night. 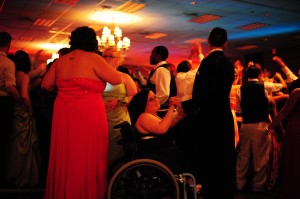 “The goal was to have them blend in with the crowd and have that feeling that ‘I’m not different from everyone else,'” Lowery said. “Being that this group has a lot of financial need, I asked some folks if they were interested in being a support group for these kids. With their help, everything was paid for. They didn’t have to worry about anything.”

Glenda Freeman was one of the many parents gathered with the prom-bound students outside the courthouse April 30. Her son, Dallas Freeman, is a senior in Lowery’s special education class and benefited from the support of the prom pals.

“If it wasn’t for Mary Lowery and the other prom pals, he wouldn’t have been able to go to prom,” Glenda Freeman said. “It’s really special to us and to him. It makes us and him feel normal. We are so thankful.”

Joseph A. Bank in Hoover donated the tux rentals for the boys and many of the girls received dresses from the YWCA of Birmingham. Shelby County High School nurse Kelly Saunders did the alterations of the girls’ dresses. Other prom pals included Charlene Couch and Tina Turner Johnson of the Sweet Potato Queens of Shelby County, Byra’s Hair Salon in Alabaster, Piggly Wiggly in Columbiana, Bernie’s on Main Street restaurant, Davis Drugs in Columbiana, Full Moon Bar-B-Que in Alabaster, Amstar Movie Theater in Alabaster, Westwood Funeral Home of Calera, Taziki’s Mediterranean Café at Chase Lake, Emily Shultz and Meg Bishop.