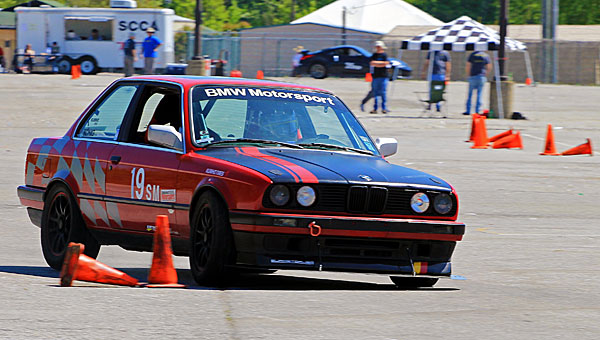 On three weekends over the past few months, the normally quiet Sunday atmosphere at Pelham’s Verizon Wireless Music Center parking lot has been filled with the sound of roaring engines, screeching tires and hissing turbochargers.

In late February, the Alabama Region of the Sports Car Club of America began holding its autocross events in the music center’s parking lot, and is preparing to hold its fourth event at the venue on May 14.

During autocross events, SCCA officials use orange cones to mark a course on the music center’s spacious parking lot. Competitors then race their cars one-at-a-time through the cone course in an attempt to record the fastest time in their classification.

For many years, the Alabama SCCA held its autocross events in the parking lot of the Birmingham Race Course near Trussville. But after club officers began looking for a better venue, they decided Pelham fit the bill, said SCCA autocross Chairman John Kilgore.

When the Birmingham Race Course, which specializes in simulcast greyhound and thoroughbred racing, began conducting business on Sundays, the autocross participants began losing some of their racing room, Kilgore said.

“When the race track was closed on Sundays, we could pretty much use as much of the parking lot as we needed,” said Kilgore, who races a 1989 BMW. “But when they started staying open on Sundays, they had to keep most of the lot available for their customers.

“And the asphalt was starting to get pretty beat up,” he added. “So we started looking for a new place to hold the events.”

SCCA officials were considering the Verizon Wireless Music Center and the parking lot of Regions Park in Hoover, but decided to come to Pelham after working with music center General Manager Patrick Boone.

“Patrick said he would be interested in hosting us, and he has been absolutely great about working with us this whole time,” Kilgore said.

Because the Pelham venue is within walking distance of several restaurants and hotels on Alabama 119, the new location is more convenient than the Birmingham Race Course, Engle said.

“We really like being at the new location,” Engle said. “It’s really handy being able to walk to the restaurants instead of driving all the way across town.”

“The new location is 10 times better as far as food and hotels,” Kilgore said. “We plan to stay at the music center as long as they will have us out there.”

Alabama coach Nick Saban hits an approach shot onto the 18th green during the Regions Traditions Pro-Am on May 4... read more