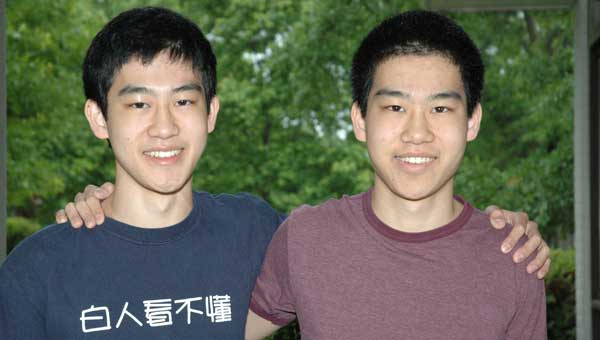 INDIAN SPRINGS – Twin brothers from Indian Springs Schools recently received identical perfect scores on their SATs, which might be followed by matching medallions awarded to them at the White House.

Brothers Jeff and Larry Liu, Indian Springs seniors, were named semifinalists in the 2011 U.S. Presidential Scholars Program competition, which recognizes some of the nation’s most distinguished graduating high school seniors, according to an Indian Springs press release.

From nearly 3.2 million seniors nationwide, approximately 3,000 were identified as candidates for the program based on their SAT and ACT scores, said Melanie Kieve, Indian Springs assistant director of development.

The Lius’ pair of perfect 2400s earned them the candidacy for the program, she said. They were then notified and asked to submit more information on their academic achievement, personal characteristics, leadership and service activities. The brothers also submitted an essay in this stage of the application process.

From 3,000 candidates, the Lius were among the 560 selected as semifinalists. In the next selection round, 121 students will be inducted into the program in late May, roughly two students from each state, Kieve said.

“All those inducted into the program will be honored during a national recognition week in June in Washington,” Kieve said. “They will get the chance to visit the historical sites and meet with legislatures and be awarded medallions sponsored by the White House. We are very excited that both have made it this far in the process.”

Though other Indian Springs alumni have been inducted into the program in the past, this is the first time in school history that twin brothers have both received perfect scores on the SAT and been selected as semifinalists for the Presidential Scholars Program, Kieve said.