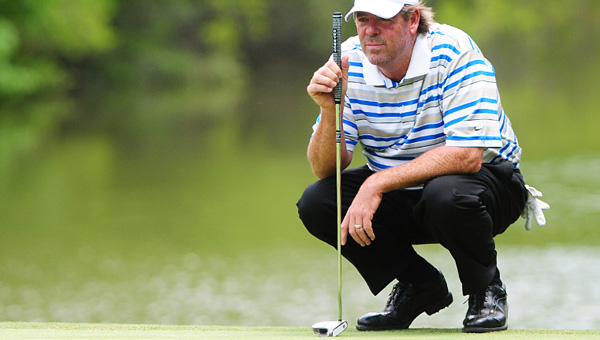 Steve Lowery lines up a putt during Friday's round. (Reporter Photo/Jon Goering)

SHOAL CREEK — The 2011 Regions Tradition gave Greystone resident Steve Lowery a chance to play in his first major championship on the PGA Champions Tour just a few miles away from his home at Shoal Creek.

Lowery, a rookie on the PGA Champions Tour, played like he had a higher comfort level with the familiar surroundings than the rest of the field early in his opening round in the tournament Thursday, May 5.

Lowery opened the round with three consecutive birdies on the first three holes and sat just one shot back of Tom Lehman, who finished the first round as the tournament’s leader, on the leaderboard at one point.

Lowery birdied the first two par 4 holes and the par 5 No. 3 hole, but the difficult course at Shoal Creek eventually provided a few frustrating moments for the former University of Alabama golfer.

Lowery had a bogey on the next two holes, a par 4 and a par 3, to drop from the top of the leaderboard midway through his first nine holes. Lowery recovered from the stretch to post a 1-under par 71 in the opening round. Lowery is currently tied for 14th on the leaderboard.

Lowery had a small following on the course, but he said he felt support from the crowd in attendance.

“I had a lot of support and a lot of friends out there,” Lowery said. “I heard a lot of ‘Roll Tides.'”

Lowery, who finished third in the 2001 PGA Championship in his highest finish in a major in his career, said he feels expectations are higher for him since he’s the only local golfer in the field.

“There’s a certain amount of pressure to do well,” Lowery said. “But it’s nice. It’s the first home game for me in 30 years.”

Lehman of Scottsdale, Ariz., the current leader in the Charles Schwab Cup standings and the tour’s leading money winner, leads the field following his 5-under par 67 in the opening round.

Lehman, who has won two of the tour’s seven tournaments this season, said course conditions allowed him to take more risks in the opening round.

“The greens are perfect and they’re holding,” Lehman said. “When you’ve got the right club in your hand, you can attack the pin. The course is very playable.”

Lehman was at 4-under after nine holes and posted his fifth birdie of his round on the 17th green to take the lead into the clubhouse.

“I’m capable of keeping myself in the game,” Lehman said. “I’m trying to keep the game really simple.”

Nick Price of Hobe Sound, Fla., Wayne Levi of Naples, Fla., Mark Calcavecchia of Tequesta, Fla., and Chien Soon Lu of Taiwan are each tied for second overall in individual standings after carding a 4-over par 68 in the opening round.

Russ Cochran of Paducah, Ky., who is currently fourth in the Charles Schwab Cup standings, withdrew from the tournament shortly before it began with a hand injury.

The 2011 Regions Tradition continues May 6 with the second round of the tournament. The second round begins with Gil Morgan, Jim Thorpe and Tim Simpson teeing off at 7:40 a.m.

Visit PGATour.com/s for complete results from the opening round of the tournament.

FROM STAFF REPORTS Seven of the top student-athletes at the University of Montevallo were honored with the announcement of the... read more