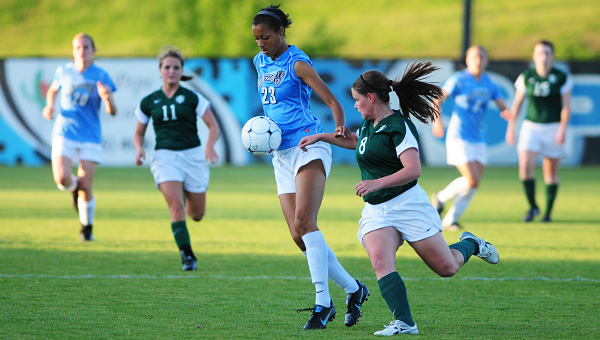 Spain Park High School senior Marie Blunt battles a Mountain Brook player for possession of the ball in the Jaguars' 2-0 win over the Spartans in an Alabama High School Athletic Association Class 6A playoff match May 6. (Reporter Photo/Jon Goering)

It may seem like an odd occurrence for Hughes, who has played a key role in the two-time defending AHSAA Class 6A champions title runs the past two years.

Hughes used the photo of the Spartans capturing the trophy, the one they gained by posting a comeback against Spain Park in the AHSAA Class 6A semifinals during her freshman season, as motivation. 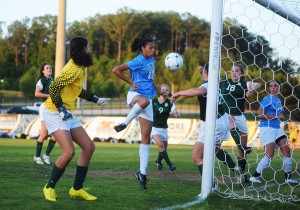 “We didn’t want to come in and go out like that,” Hughes said.

Spain Park coach Robert Starr said he wasn’t worried about the Jaguars having another playoff letdown against the Spartans.

“We’ve been there,” Starr said. “We lived it. It’s win or go home. I think we handled it pretty well.”

Hughes played a role in each goal for the Jaguars, who took advantage of two corner kick opportunities late in the first half.

Spain Park took a 1-0 lead when Hughes sent in a blast from the right corner of the field to fellow senior Lakin Eddy, who headed the ball into the left side of the  net, with 7:54 left in the opening half. 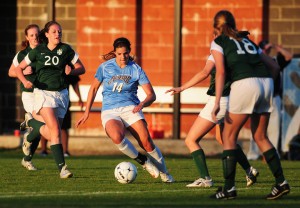 The Jaguars went up 2-0 with 1:47 remaining in the opening half when Hughes sent in a corner kick from the right side, which was tipped by outstretched arms of the Mountain Brook goalkeeper. Blunt played the ball behind the Spartans’ keeper and pounded it between two Mountain Brook defenders into the center of the net.

Spain Park had seven unsuccessful corner kick opportunities before capitalizing on the final two chances in the opening half.

“We work to get our corner kicks,” Hughes said. “They’re pivotal.”

Spain Park goalkeeper Schyler Arnold posted four saves in the shut out, including a diving save to cover up the ball with Mountain Brook forwards circling around her with 9:30 remaining in the match.

Arnold took over goalkeeping duties this year after watching her older sister, Lauren, lead the Jaguars to two consecutive AHSAA Class 6A titles before embarking on a collegiate career at Clemson University.

Arnold said she’s pleased to be following in her sister’s footsteps.

“I love it,” Arnold said. “She’s holding me to a higher standard.”

Mark Calcavecchia watches a drive during Friday's round. Calcavecchia ended the day in the lead at eleven-under par. (Reporter Photo/Jon... read more