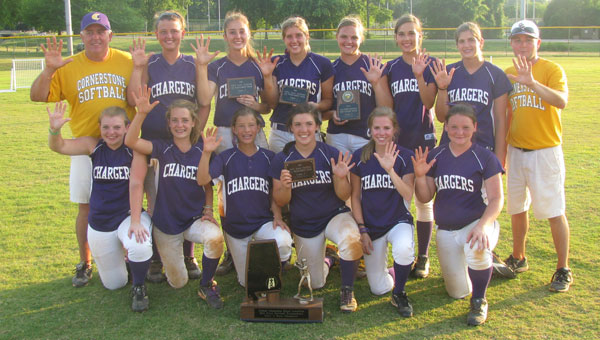 The Cornerstone Christian School softball team had its share of doubters when the 2011 season began.

The Chargers, coming off a run of four consecutive Alabama Independent Schools Association Class 1A championships, had lost their ace Chelsey Dunnaway to graduation.

Without her arm, opponents figured, Cornerstone Christian’s run of state titles would come to an end.

The Chargers (22-11) captured an AISA record fifth consecutive Class 1A title following a 4-1 win over Ashford Academy in the championship game May 7.

“The girls really wanted it,” said Cornerstone Christian coach Mark Armstrong. “They dug deep down and gave it all they had. I’m extremely proud of them.”

The fifth championship didn’t come as easy as the first four.

Cornerstone Christian fell into the elimination bracket following a loss to Ashford Academy earlier in the day. The Chargers responded with a 14-0 win over Chambers Academy to reach the championship game.

Jana Kelbie Armstrong led the Chargers in the title game with a game-clinching three-run homer.

Armstrong and teammate Destiny Dillard helped Cornerstone Christian take care of business in the circle in the state tournament. Armstrong, Dillard, Kailey Goodwin and Allie Toney were named to the AISA Class 1A all-tournament team.

Following a school-record fifth championship, Armstrong quickly turned his attention toward next season.

“(The championship) is huge,” Armstrong said. “We had a young team.”

By WESLEY HALLMAN / Sports Editor Kingwood Christian School softball players were put through the gauntlet during the 2011 season.... read more