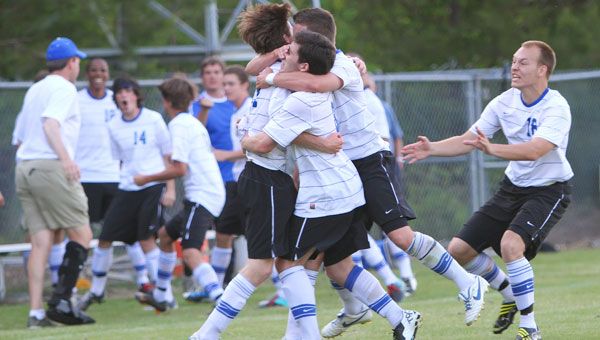 Chelsea High School soccer players celebrate the game-winning goal by Travis Mitchell in a win over Sylacauga in the Alabama High School Athletic Association Class 5A quarterfinals May 7. (Contributed/Cari Dean)

The Chelsea High School boys’ and girls’ soccer teams advanced to the Alabama High School Athletic Association Class 5A Final Four for the first time in school history May 7.

The Chelsea boys advanced to Huntsville following their dramatic 2-1 victory over Sylacauga in a Class 5A quarterfinal match.

“It was an emotional win for us,” said Chelsea coach Lee Miller. “I have great respect for Sylacauga. They played a fantastic game. We struggled to play the way we like, but I’m so proud that our guys found a way to win when they needed to. It seems like we’ve been working for this moment for years, and it’s so gratifying to see it come true for our players. We’re honored and thrilled to be able to compete in the Final Four in Huntsville.”

The record crowd at the Chelsea High School soccer field saw the Hornets grab a 1-0 lead midway through the first half when Ashley Page chipped a through ball over Sylacauga’s back line. Travis Mitchell then drove the ball into the bottom left corner of the goal to give Chelsea an early lead.

About 10 minutes later, Sylacauga answered when a throw-in from the right sideline deflected off of Chelsea defender Russell McClinton. The ball rested in front of Sylacauga forward Adolfo Gamino, who stuck the ball into the bottom right corner to tie the match.

The score remained 1-1 at the half.

The second half was mainly a defensive battle with both sides looking for a golden moment that would possibly be the game-winner.

As overtimed loomed with under three minutes left, Chelsea finally broke through when Page again found Mitchell on a short through ball. Mitchell took one touch in the box and then drilled  the ball  into the upper left netting to send the Chelsea fans into a frenzy.

Chelsea will face Fort Payne in the semifinals May 13.

The Chelsea High School girls’ soccer team defeated Sylacauga 2-0 to reach the Class 5A semifinals for the first time in school history.

Chelsea scored its first goal 15 minutes into the first half when senior Lauren Swee played the ball up to forward Kamilla Kjoestvedt, who raced past Sylacauga’s defender and scored to put the Hornets up 1-0.

Later in the first half, Lauren Swee scored from a beautifully served ball from senior Iyani Hughes on a corner kick.  Swee rocketed a header past the keeper to put Chelsea up 2-0.

Chelsea will face Arab in the Class 5A semifinals May 13.