In 1973, 12-year-old Kathy Strong wished for a Vietnam War MIA bracelet in her Christmas stocking. On May 13, 2011, after 38 years of waiting, Strong will remove the bracelet bearing the name James L. Moreland, as Moreland’s remains are coming home.

Moreland was born on September 29, 1945, in Bessemer, and his parents moved the family to Anaheim, Calif., where Moreland graduated from Western High School in 1963. He enlisted in the Army in September 1966 and was assigned to the Green Berets as a paratrooper and medic. 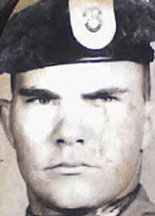 In February 1968, Moreland went missing in action, but Strong kept the vow listed on the MIA bracelet’s instructions.

“Normally, it (the soldier) was a stranger to you, as it was with me,” Strong said of her bracelet. “You promise to put it on and wear it until he comes home.”

Strong, currently a financial analyst for a community bank in Walnut Creek, Calif., checked newspapers for a year, searching for Moreland’s name.

“I didn’t know if my soldier was a prisoner or missing,” she said. “It wasn’t until they started listing names in the newspaper, and after a year, I didn’t see his name. The organization sent a small biography and a photo. I carried his picture in my wallet for 25 to 30 years.”

Moreland served in the Vietnam War under his commanding officer, Paul Longgrear, from 1967 to February 1968.

Out of 24 men in his unit, Longgrear was one of the 14 Green Berets in his unit that survived the Vietnamese attack that took Moreland’s life.

“Where he (Moreland) died, we were 60 minutes away for a helicopter to come get us,” Longgrear said. “You had to sign a statement saying if you were on a highly secret mission, that the government would deny your identity. There were 24 Green Berets, and we were attacked by about 1,500 North Vietnamese in Russian tanks, used for the first time in the war. They had just about everything they wanted; they attacked us with it. The battle was so ferocious, out of 24 men, only 14 made it out alive.”

Longgrear said Moreland was a good-looking guy and extremely intelligent.

“He had absolutely no fear in combat,” he said. “If someone got hit, he’d run into the fire to drag them to safety.”

Funeral services for Moreland will begin with a presentation ceremony at The American Village’s Liberty Hall on May 13 from 6 to 9 p.m. Cody Caldwell, the funeral director of Rockco Funeral Homes of Montevallo, said the Blue Star Salute Foundation secretary, Robert G. Nivens, will speak and hold a Blue Star Salute to the family. Moreland’s casket will be in repose for visitation, Caldwell said.

“The Blue Start Salute Foundation is helping coordinate the services,” Nivens said. “We’re volunteering to do anything we can. Any time there’s a casualty or funeral service, we habitually volunteer in any way we can. We will be there to pay our honor and respect to the soldier and his family members.”

Moreland’s remains will be buried with full military honors with his late parents in Ashby Cemetery in Brierfield on May 14 at 1 p.m. Strong will present her bracelet to be buried with the remains at Rockco Funeral Home prior to the service. The public is invited to both the presentation ceremony and the funeral service.

Tom Lehman holds the Lyle Anderson trophy up in the air after winning the Regions Tradition on May 8 at... read more