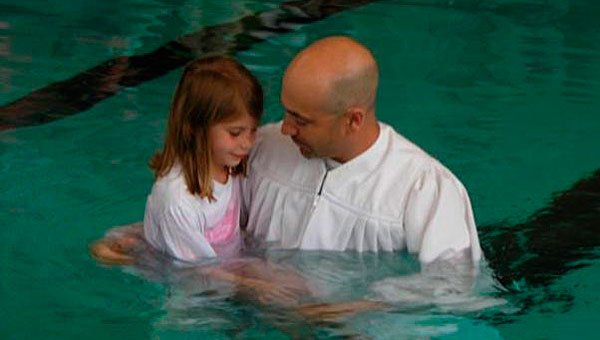 On about eight weekends a year, members of a small congregation at a Baptist church in Pelham gather near a creek in the heart of the city, at Pelham’s YMCA public pool or in a church member’s backyard to celebrate one of the denomination’s most sacred events.

What began in the 1970s as a necessity for Crosscreek Baptist Church has become a time-honored tradition rooted in the church’s faith.

When the church began in 1975, members did not have a church facility, and instead congregated in a home on Crosscreek Trail. Because the home did not provide enough space for baptism services, the congregation instead held baptisms in Bishop Creek, which runs through the Crosscreek neighborhood.

The church members began planning to construct their first central building in 1977, and originally planned only to construct a multi-purpose room to serve as both a fellowship hall and sanctuary. The plans called for a baptismal pool in future expansions.

“In those early years, Crosscreek celebrated baptism at the creek or, as the church and neighborhood grew, in a church member’s backyard pool,” said the church’s current Pastor Jay Kieve. “The backyard pool became the preference as baptismal worship often led to cookouts and pool parties.”

When the time came for the church to expand and add a new sanctuary, its members decided not to include the baptismal pool originally planned to be a part of the new addition.

Because the Bible explains Jesus was baptized by John the Baptist in public in the Jordan River, the Crosscreek congregation decided to follow in Christ’s footsteps by continuing to hold baptism services outside the church, Kieve said.

When Crosscreek built its current sanctuary in the mid-1980s, the tradition of baptisms away from the church property took on theological choice rather than mere necessity,” Kieve said. “The congregation chose not to include a baptismal pool in the new facility in order to move closely match Jesus’ baptism.”

As a result of the church’s decision, the congregation holds all of its baptism services in Bishop Creek or in a church member’s backyard pool when the weather allows. During inclement or cold weather, the church holds baptisms in the indoor pool at the Pelham YMCA.

When Kieve became the church’s pastor in 2005, he said he quickly noticed the church had no baptismal pool in its main building. However, Kieve said he was inspired by the church’s baptism history.

“When I asked people of the congregation about having no baptismal pool in a Baptist church, learning how necessity gave way to theological conviction delighted me,” Kieve said of the church, which currently has about 100 members. “What a joy to serve a congregation willing to think outside both necessity and traditional denominational expectations.”