Hurlers lead Rebels to another title 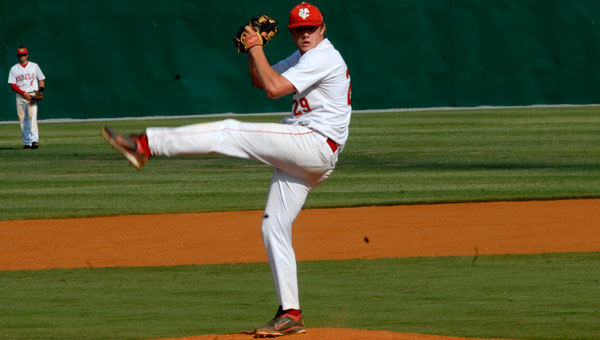 Coosa Valley Academy senior Jarrod Mims prepares to deliver a pitch to the plate in the Rebels' 2-0 win over Crenshaw Christian Academy in the first game of the championship series May 10 at Paterson Field in Montgomery. (Reporter Photo/Wesley Hallman)

MONTGOMERY — Coosa Valley Academy baseball coach Bobby Hughes offered up a simple formula after leading the Rebels to back-to-back Alabama Independent Schools Association Class 1A championships following a 5-4 walk-off win over Crenshaw Christian Academy, which clinched the school’s second title in as many seasons May 10 at Paterson Field in Montgomery.

The Rebels proved their coach correct after three Coosa Valley hurlers were named to the AISA Class 1A all-tournament team following a 2-0 and 5-4 sweep of Crenshaw Christian. Coosa Valley (41-6) clinched the series after Crenshaw Christian pitcher Jud Sutlcy was called for a balk with the bases loaded in the bottom of the seventh inning. 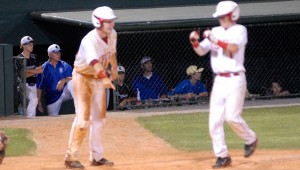 Coosa Valley senior Jarrod Mims, who earned the AISA Class 1A championship series’ most valuable player honor, pitched a complete-game gem to lead the Rebels to a win in the series opener. Fellow senior Nic Bates entered the second game in the sixth inning with the Rebels trailing and shut down the opponent’s lineup with two strikeouts in the final two innings.

Kennedy, who started on the mound in the second game, didn’t want the Rebels’ pitching staff to get all the credit. He praised the Coosa Valley infield and outfield, which helped limit the Crenshaw Christian offense to only nine total hits in 14 innings in the championship series.

“Our defense is a very big part of it,” Kennedy said. “We always have our defense to  back us up.”

Mims relied on his defense in the opener as he gave up only three hits in the complete-game shutout.

Crenshaw Christian had a double to the right-center field gap in the bottom of the second inning when Bullen dove for a catch but couldn’t quite get to the ball.

Mims struck out nine batters without giving up a walk and faced only three batters over the minimum in the first game of the series.

Mims also had a hit, an RBI single to center field in the first inning, and drove in a run at the plate in the victory.

Garrett McMillan finished 1-for-3 at the plate.

The Rebels took a 1-0 lead in the top of the first inning when Bullen led off the game with a single to center field, stole second base, moved to third base on a sacrifice fly and scored on a RBI single by Mims.

Coosa Valley added its final run in the top of the third inning when Mims reached on a fielder’s choice. Wood, the Rebels’ courtesy runner, stole second base and was in the process of stealing third base when he made the turn and headed home on an RBI single by Grimes.

The Rebels jumped out to a 1-0 lead in the second game, but couldn’t hold the lead throughout after giving up two runs in both the third inning and the fifth inning.

Coosa Valley loaded the bases in the bottom of the seventh inning when Cryer led off the inning with a walk before scoring on a balk call three batters later.

Roe led the Rebels at the plate as he finished 3-for-4 and drove in one run.

Bullen and Wood had one hit each.

Daniel Kennedy started on the mound and gave up two earned runs on five hits with four strikeouts and two walks in five innings.

Nic Bates pitched earned the win in relief after giving up just one hit with two strikeouts in two innings.

Hughes said the Rebels didn’t have an easy task in repeating as AISA Class 1A champions.

“This year we had a target on out back,” Hughes said. “It’s hard to repeat. It all falls back to our pitching and experience.”