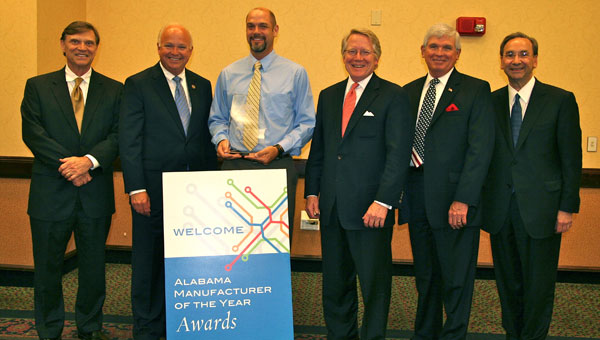 The Business Council of Alabama awarded the Lafarge North America Roberta Plant in Calera the honor of 2011 Medium Alabama Manufacturer of the Year.

“The 1600-acre site employs 195 men and women and holds close to 25 percent of the market share in Alabama with a total annual production capacity of 1.5 million tons of cement,” according to a press release from the BCA.

Randy Johns, training coordinator for the plant, said the BCA and the Alabama Technology Network partner to focus on existing manufacturing in Alabama.

“They’re not trying to recruit new business, but trying to capitalize on what exists in the state,” Johns said. “Alabama Technology Network focuses on industrial training. For us at Roberta, we’ve been working with ATN for 5 years, and they’ve provided training for us for the last 5 years. We were running up last year. We won our category this year.”

Anthony Perry, the Calera plant’s manager, said the plant strives for excellence, and the award will highlight cement manufacturing within the state.

Environmental Director Travis Reed said he takes pride in the plant being a part of his community.

“In living here over the last eight years, I’ve seen this area evolve,” Reed said. “Being a part of the community is something we take pride in as well. It just goes to show that not just putting product out the door, the importance of being a good community neighbor. We applied for the award for the last three years, and we are proud to have won, being a part of the Shelby County Community.”

The BCA partnered with The Alabama Technology Network, The Chamber of Commerce Association of Alabama and The National Association of Manufacturers to present the awards.