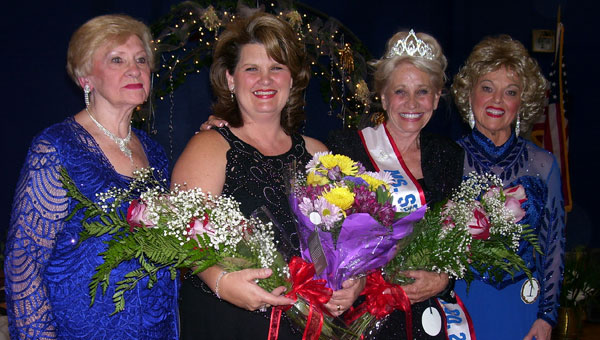 “I would never have done anything like this a few years ago,” said Sally Beth Vick, referring to entering the Ms. Senior Alabama pageant. “I wish more women would participate. It’s a great learning experience.”

Vick, Ms. Senior Alabama 2009, sang at the April 30 Ms. Senior Shelby County pageant, a preliminary to the state competition. Winners perform at various functions during the year, and state winners compete for the title of Ms. Senior America.

“Women grow through the pageants,” Vick said. “They get to do things they have never done before.”

“Today’s senior woman has redefined the term rocking granny,” said Karen Guice, chairman of the board for Ms. Senior Alabama, Inc. and emcee for the Chelsea event.

Shelby County Reporter columnist, Niva Dorough, sang her way to the title of runner-up, and will compete at state, if Traylor is unable to participate.

Contestants were judged on interview, poise, life philosophy and talent.

Other contestants were Mary Ellen Hartness and Mary Young, who sang and performed with beauty and grace.

“Each contestant possessed a unique ability which made it difficult for the judges,” said pageant director Taylor Bennett. “Working with Mrs. Chappell (Edwina Chappell, pageant organizer and Ms. Senior Alabama 2008) and the contestants was an honor. They are beautiful inside and out.”

Bennett, mother of three young children, holds titles from pageants at the local, state and national levels. The Ms. Senior pageant helped her see the strength of “our seniors,” she said.

According to their website, Ms. Senior Alabama, Inc is a “non-profit organization designed to enrich the lives of senior women while also allowing them to share their experiences, wisdom and interests with others.”

Chappell also sang at the pageant and exhibited what the website calls the “Age of Elegance,” as she went about her other duties.

Besides serving as inspiration to seniors, the Chelsea pageant is also contributing to recent tornado victims by promoting “Bama Buddies,” an organization dedicated to collecting and distributing stuffed toys and other items to children who were affected by the storm. To donate, contact Cousins Insurance Company at 678-3337.