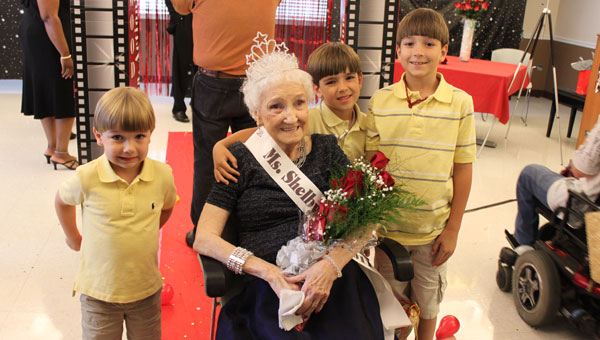 ALABASTER – Poised women in elegant gowns held the arms of their escorts as they walked the aisle to be seated in front of the audience. The women smiled broadly as they caught the eye of their children, grandchildren and even great-grandchildren sitting amongst the crowd. With a flourish, the Ms. Shelby Ridge Pageant began on May 12.

DiAnna Wilson, director of admissions, has watched the pageant grow over the last seven years.

“It’s so special for the families and the residents,” she said. “They have fun, and there are events all week long. We ask people from the community to be the judges to make the pageant a part of the community.”

Jennifer Brakefield, the pageant’s master of ceremonies, began the question-and-answer session by asking Patricia Bradberry what she liked most about Shelby Ridge.

“If I ever have a problem, I know I can go directly to the staff or administration and get it resolved as soon as possible,” Bradberry said.

When asked about her favorite president and why, Lillian Howard said, “I was born in Akron, Ohio during the presidency of Franklin Delano Roosevelt, so I guess he turned out to be my favorite.”

Bessie Smitherman was asked what she thought was the secret to a long, happy life.

“Helping others is the key to a long and happy life,” she said, as the crowd cheered approvingly.

“I’m 92 years old, and I have never won anything in my life,” Smitherman said. “I’m so surprised. I’m so glad my family came to see.”