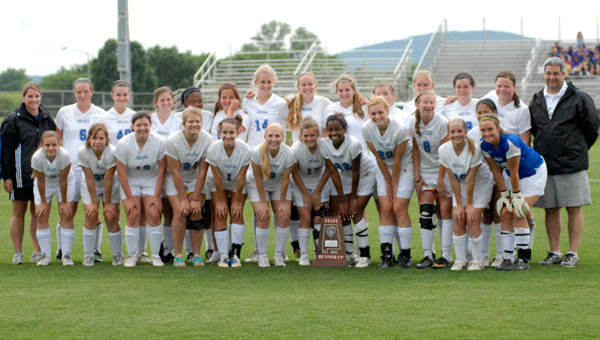 Few people believed his squad could be the first to represent the school in a championship setting, but Hammett never had any doubt.

His faith was tested when two his seniors went down with season-ending injuries. Despite the adversity, Hammett kept reminding his players they had what it took to reach the Alabama High School Athletic Association Class 5A championship match.

Chelsea fell to Spanish Fort 6-3 in the AHSAA Class 5A title match May 14 at John Hunt Park, but Hammett and his players took pride in wearing white and blue as they fought for the school’s first ever championship in a team sport. 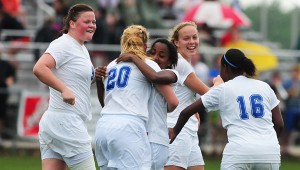 The Chelsea players congratulate Iyana Hughes after she scored a second-half goal to put the Hornets ahead 3-0 in the May 13 semifinal match against Arab. (Reporter Photo/Jon Goering)

Chelsea senior Iyani Hughes, a Kennesaw State University women’s soccer signee, said it meant “the world” to be part of the first group to play for a state title from her school.

“We’ve dealt with a lot of injuries, but I’m happy with the results we’ve had,” Hughes said.

The Hornets battled to a 3-3 tie with Spanish Fort in the first half of the championship match.

Stephanie LeBeau gave Chelsea an early 1-0 lead with her goal, which was assisted by Kamilla Kjoestvedt, just 1:22 into the match. 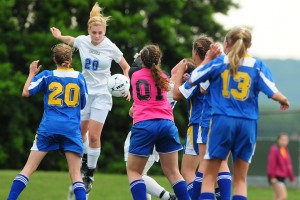 Chelsea's Lauren Swee (20) tries to get the ball past the Arab defense during Friday's match. (Reporter Photo/Jon Goering)

Spanish Fort tied the match at 1-1 with a goal in the sixth minute before the Hornets added two goals midway through the first half to take a 3-1 lead.

However, Spanish Fort scored two goals late in the first half to tie the match at 3-3 at the break and clinched the state championship with three goals in the second half. 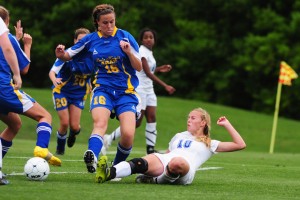 Chelsea's Mara Roberts (10) slides in to make a play during the May 13 semifinal match against Arab. (Reporter Photo/Jon Goering)

“I call them the ‘game-changers'” Hammett said.

Chelsea defeated Arab 2-0 in the AHSAA Class 5A semifinals May 13 at John Hunt Park.

The match marked the Hornets’ third consecutive match in the playoffs without allowing a goal. 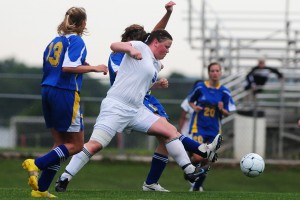 Roberts scored the Hornets’ first goal in the semifinal match in the third minute of the match to give Chelsea an early 1-0 lead. Roberts recorded an assist on the Hornets’ second goal after feeding the ball to Iyani Hughes for a goal midway through the second half.

Niven finished with eight saves in the semifinal match.

“My biggest concern was nerves,” Hammett said after the semifinal match. “We came out and played great.”

Chelsea's Ashley Page goes after the ball against Fort Payne's Joel Navarro during the semifinals match on May 13. (Reporter... read more