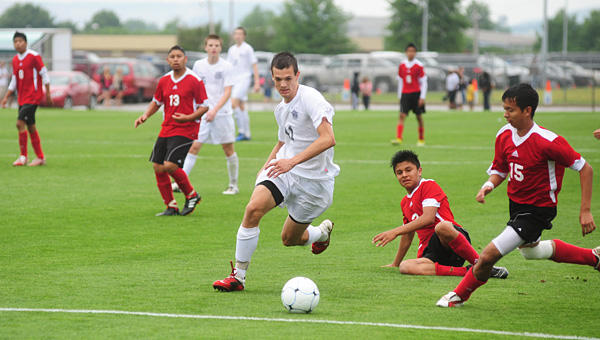 Indian Springs' Alexander Jamroz works his way past the Collinsville defense during the match May 13. (Reporter Photo/Jon Goering)

Instead, Jamroz watched Indian Springs struggle on the offensive end of the field from the bench in a somber mood after receiving two yellow cards, resulting in the first ejection in his career, in a 1-0 loss to defending AHSAA Class 4A-1A championship match May 14 at John Hunt Park.

Jamroz received his first yellow card in the fourth minute for dissent. He was ejected from the match after receiving his second yellow card, for unsporting behavior, late in the first half. 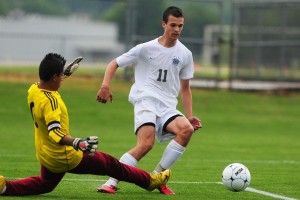 “We’ve played 32 games and not once did a single kid get tossed,” Tozzi said. “I’m proud of my kids for going 32 games without a single red card.”

Tozzi said losing Jamroz, and an 11th player on the field, was too much for his team to overcome. Stuart McLean was given a red card for stepping on an opposing player midway through the second half. Players who are given a red card and ejected from a match aren’t replaced.

“It’s going to affect your play,” Tozzi said. “I would like to play (the match) again at full strength.” 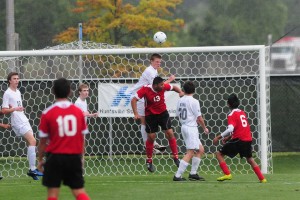 The Indian Springs defense tries to keep the ball out of their goal during the first half of play. (Reporter Photo/Jon Goering)

UMS-Wright scored the long goal in the match in the 56th minute after a scoreless tie in the opening half.

Jamroz scored four goals in Indian Springs’ 7-2 win over Collinsville in the semifinals May 13.