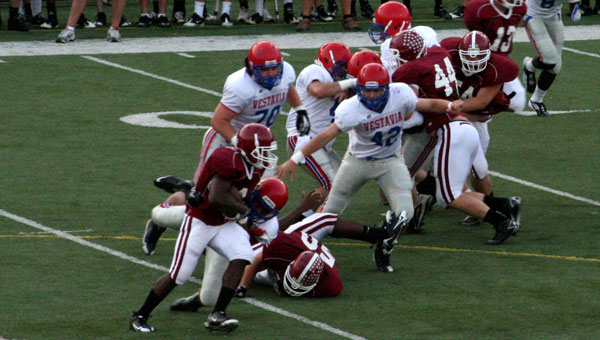 Shelby County High School football coach Ryan Herring learned plenty about his team as it wrapped up spring practice with a 41-16 loss in a scrimmage May 12 at Vestavia Hills.

The Wildcats scored two touchdowns early in the scrimmage and led the Rebels 16-14 at halftime. Fatigue set in for Shelby County in the second half and Vestavia Hills dominated in the second part of the scrimmage, which included plenty of playing time for backups.

Herring said the scrimmage proved the Wildcats still have work to do over the summer in preparation for the 2011 season.

Quarterbacks Evan McNeal and Ty Proctor split time behind center in the scrimmage.

Proctor scored for the Wildcats with a 3-yard rushing touchdown. McNeal tossed a 20-yard touchdown pass to Denzel Williams in the scrimmage.

“We got a good couple of weeks of practice,” Herring said. “The kids worked hard. It was a real positive for us. It told us a lot about some kids we had questions about.”