When Eunice Turner, 95, was a child, her family raised most of their food or bought it from a “Rolling Store” man.

Today, she has a choice of three large grocery stores in Chelsea — Winn-Dixie, super Walmart and the newly-opened Publix.

Two rolling stores stopped at the Simmons home — one from Vandiver and one from Wilsonville.

They were old pickups with homemade sheds, she recalled. “We bought our flour, sugar and coffee from them. We had things like chickens, cows and hogs.”

She recalled three stores in early Chelsea where her family bought horse feed and fertilizer.

These general stores were Weldons, Chessers and Cranes, which was later Blackerbys, she said. 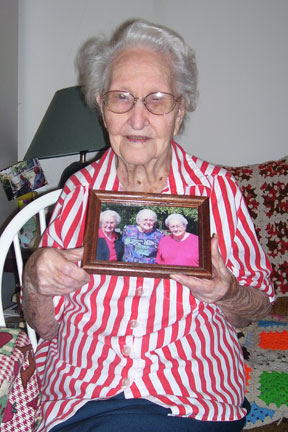 They stood in a row at the corner of what is now Shelby County 47 and 39, before Mr. Blackerby moved his store into a building across the road, where Sherry‘s beauty shop is now located.

Her daddy carried the family in a wagon to church at the Methodist church, which was located on the hill across from the present Chelsea Church of God parking lot. After he died, and the church “died,” she said, her mother started taking them to Liberty Baptist.

Mrs. Turner is now the oldest member in the Chelsea Church of God.

Her grandfather Robert Simmons’ house was “near The Narrows,” Turner said. “I remember when the highway (old 280) was built under the trestle. It went through Granddaddy’s house and yard.”

Her Granddaddy Simmons came to the Chelsea area from Tennessee, she said, bringing with him five boys: Elbert, Mark, Roy, Herbert and Tolbert.

Turner said she was 9 years old when her father Tolbert died, leaving her mother with four young girls, the youngest only fifteen-months.