CAP takes teachers to the skies 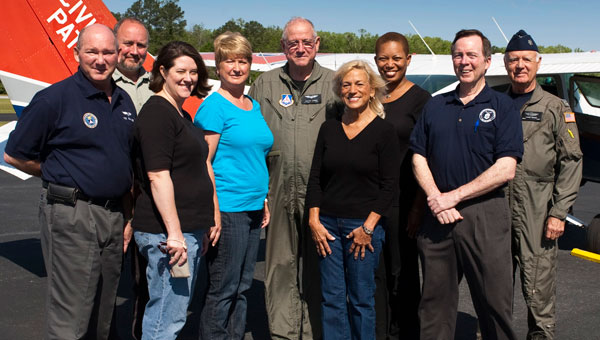 By RHONDA PYATT / Special to the Reporter

Five local educators from Shelby County took to the skies from the Shelby County Airport as part of a Civil Air Patrol Teacher Orientation Program flight to experience the thrill of soaring above the local terrain while being introduced to principles on how the plane flies, turns and banks.

Before the teachers took to the skies with Maj. Ladde Mayer from CAP Central Alabama Senior Squadron AL-132, they attended an introduction to flight and safety given by Lt. Col. Austin Landry. While the first two teachers were airborne, Lt. Col. Landry, Capt. James (Rick) Kilgore and 1st Lt. James (Brian) Pyatt from the same squadron presented topics such as Bernoulli’s theory of lift, weather and other aviation principles to the remaining teachers.

Jesse Cunningham was on the first flight. While he was trading his front seat position for the back seat position he was asked, “Are you ready to go up again?”

His response was “I’ll fly as many times as they will let me.”

Holly Dobbs used photography to share the experience with her students and other teachers by posting a slideshow to the school’s share drive.

“Children are so interested in the world that they live in, especially when they see it from a different angle,” Dobbs said. “The world looks so different from the sky.

Additionally, the material that we received made the event more successful. Not only do the students get to take part in the flight through photography, but they can learn about the plane, its inner workings and extend into geography.”

Catherine Walton is afraid of heights. When her students wondered how she could fly in a plane when afraid of heights, she was able to give them a life lesson on conquering their fears. She also has two girls in her class who want to be astronauts. They asked if she might get to fly in the space shuttle now.

Because of the girls who are interested in aerospace, Dobbs felt that the TOP flight was something she should take advantage of.

From an administrative perspective, Charlotte Draper said, “The TOP flight is an excellent hands-on experience for teachers that will carry over into the classroom as they prepare and present lessons to students. Membership in this program provides the teacher a wealth of well developed instructional resources and materials that can be used as supplementary materials in teaching science and math. The Aerospace Education Program provides curriculum materials aligned with the state standards and follows the Alabama Courses of Study. As an extension of the program, teachers can apply for classroom grants and are offered classroom activities published in monthly newsletters. Shelby County is fortunate to be in partnership with the Civil Air Patrol to provide these enriching experiences for our teachers.”

At the end of their flight, each teacher was presented with a flight certificate to commemorate the experience.

The experience also fostered relationships between pilots and the educators and led to some CAP members being invited to participate in Career Week at the schools.

If you are a CAP member who is also a teacher and would like to participate in the Teacher Orientation Flight program, contact Judy Stone at jstone@capnhq.gov with your name, CAP ID and your city and state. If you would like to join CAP as an aerospace education member, go to www.capmembers.com/aerospace_education/join_as_aem.cfm