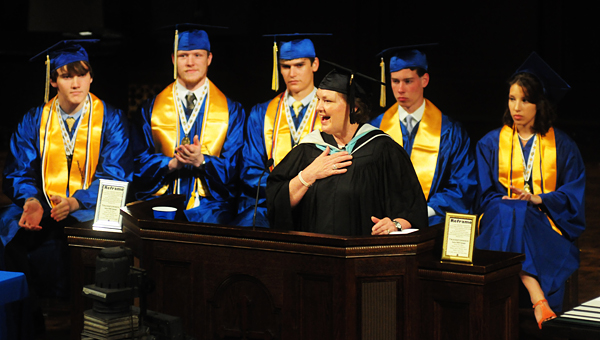 With the valedictorians seated behind her, Hope Christian School Administrator Connie Atchison reads a letter from a parent during the May 19 graduation ceremony. (Reporter Photo/Jon Goering)

A U.S. military official and the leaders of the Pelham-based Hope Christian School shared words of encouragement and advice for the school’s 116 seniors during Hope’s graduation May 19 at Briarwood Presbyterian Church.

The graduates, many of whom had been home-educated since they began school, racked up more than $2 million in scholarships, and one-third of the class had ACT scores of 25 or higher, said Hope Administrator Connie Atchison.

“If we were to combine the years that all of these students have been home schooled, it would total 972 years,” Atchison said. 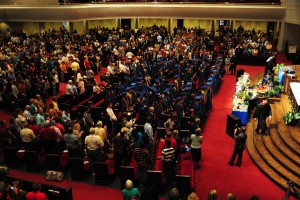 Hope Christian School graduates file into their positions at the start of the graduation ceremony on May 19 at Briarwood Presbyterian Church in Hoover. (Reporter Photo/Jon Goering)

“The main challenge I make to you is to wake up every day and try to pursue what Christ gives you to do,” Kemmerly said. “The world will be screaming at you to pursue other awards, but the challenge is to sacrifice in service to Christ.

“Any award we receive should be a consequence of serving Christ,” Kemmerly added.

During the ceremony, Atchison awarded several seniors for their service to the school and to the community.

Caleb Douglas, Meagan Stevens, Katelyn Zeanah and Hunter Daniel received the Faithfulness and Leadership Award. The school presents the award each year to seniors who have “contributed joyfully in the area of faithfulness and spiritual leadership in their school, their community and their church.” 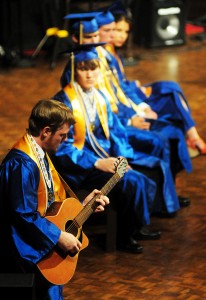 Connor Harbin, Anna Wood, Haleigh Kemmerly and Rachel Kirkpatrick received the Testimony and Influence Award, which is given to seniors who display “outstanding Christian testimony” and who “exert the best Christian influence.”

The school also awarded Luke Jones, Houston Shows, Reid Hickman and Kasi Crittenden with its Dedication to Service Award. The award is given annually to seniors who “have exhibited a servant’s heart by word and deed in their community, church and school.”

Ashleigh Callahan and Brock Boyd also received the U.S. Army Scholar-Athlete Award, which is given each year to a male and female student who excels in the classroom and on the playing field.

“Congratulations graduates, you have completed the easy part of your life,” McCall said. “Now go do something great.”

Because Hope is composed of a network of Christian-based home educators, school Superintendent Rev. Daniel Wayne Atchison urged the graduates to take advantage of their faith-based education.

“When I was young, I didn’t even know where to find drugs. My how things have changed,” Daniel Atchison said. “Now, you are under more attack. That’s why your parents wanted you to home school, to protect you from those influences.

“But you are about to jump into a world full of those temptations,” he added. “Let’s not sacrifice by compromising and giving in to a little thing. We don’t know what we are sacrificing in the long term.”