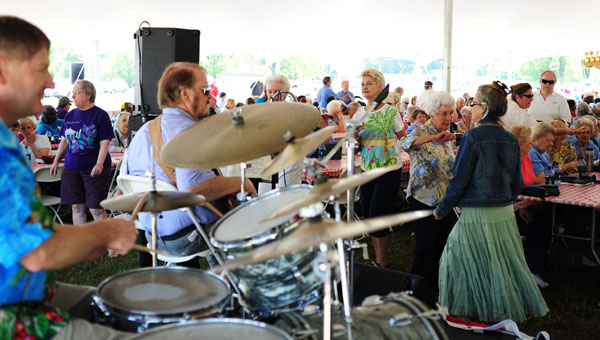 Visitors dance at the Shelby County Senior Picnic on May 19 at the Senior Center in Alabaster. (Reporter Photo/Jon Goering)

For the past several years, Robert Cowan and his friend Mary Jo Morrow have traveled to several venues around the county to attend the annual Shelby County Senior Picnic.

But this year, the two members of the Montevallo Senior Center got a chance to experience something new as they celebrated with hundreds of their friends at the new Alabaster Senior Center.

“It’s a beautiful spot with Buck Creek right here next to it,” Cowan said as he and Morrow took a break to have a snack under the Buck Creek Trail pavilion. “We are members of the senior group in Montevallo, but we have still never gotten a chance to see (the Alabaster Senior Center).”

More than 650 seniors from throughout Shelby County joined Cowan and Morrow at the Alabaster Senior Center and the adjoining Buck Creek Trail May 19 as they attended the 2011 Senior Picnic.

The picnic, which is held at a different venue in Shelby County every year, featured live music, food and dozens of vendors set up around the property.

Alabaster Mayor David Frings, who operates the Oak Mountain Interpretive Center at Oak Mountain State Park, gave the group a look at his collection of exotic animals, including a hissing cockroach and a dwarf Cayman, which is similar to a crocodile.

Alabaster and Shelby County officials kicked off the day by holding a ribbon-cutting ceremony for what Frings called a “senior playground,” which is an outdoor recreation area behind the Senior Center featuring several pieces of workout equipment, such as an elliptical machine and a weight-lifting device.

The outdoor senior recreation area, which is the first of its kind in the state, was a partnership between Shelby County and Alabaster, and came about after Alabaster employee Lisa Glasgow noticed similar senior facilities in Europe.

“She (Glasgow) found the concept online, and passed it along to us. It’s a primarily a European thing,” Frings said, noting state Sen. Cam Ward and state Rep. Mike Hill helped secure funding for the outdoor recreation area.

The new outdoor recreation area also includes a walking track and a new shuffle board.

Because the event was one of the largest held at the Alabaster Senior Center, it gave the city a chance to showcase the new additions, said Alabaster Senior Adults and Therapeutic Manager Alicia Walters.

“It’s great to give other seniors in Shelby County a chance to see the wonderful support we have for our seniors here in Alabaster,” Walters said. “We have really enjoyed the partnership with Shelby County.”