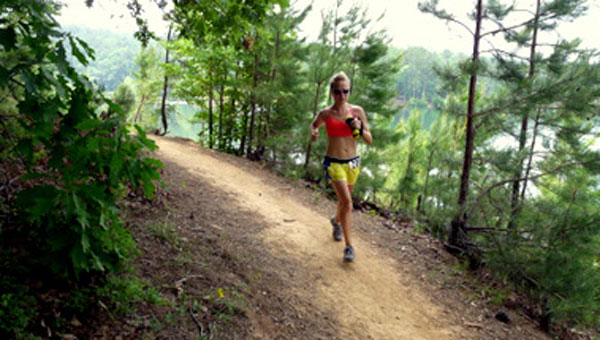 Holley Sweeney of Pelham follows a path through the woods May 21 at Oak Mountain State Park during the XTERRA Trail Run. (Contributed)

Wall, a former cross country star at Oak Mountain High School and Auburn University distance runner, grew up running on the trails at Oak Mountain, but surprisingly, this was his first-ever trail race.

Race favorite Brandon Mader of Huntsville, who was fourth at the XTERRA Trail Run World Championship in Hawaii in Dec. 2010, took off early and held the lead for about the first 17 miles.

“He went out really fast and dropped me about three-fourths of a mile into the run,” explained Wall, who is working on his masters degree in aerospace engineering at Auburn. “I looked at my watch and we were running at a 5:30 per mile pace and I thought ‘oh-boy’ it’s going to be one of those days.  I settled into second and didn’t take the lead until about 16.8 miles in when Brandon started cramping up.  I cramped up four miles later at the hill just past mile 20.  This course is really, really tough but at the same time awesome to run on these trails.”

Wall ended up running at a 7:15 pace and according to his wrist watch burned about 2,800 calories on the 25-plus mile jaunt through the forest. His nutrition plan included two GU energy gel packets before the run, one during, and taking in Gatorade and water at all 10 aid stations.

In the women’s race, Sweeney, who has been running the trails here at Oak Mountain every weekend since she returned from a three-year stint in Korea, led from start to finish and crossed the line 17 minutes ahead of runner-up Ronda Felder from Greenville, S.C.

“Alison Hulsey (who won the 21k race) and I have been running out here every weekend so I’m real familiar with the terrain and that surely helped,” Sweeney said. “I just love running in the woods with Mother Nature all around and these guys take such good care of the trails it’s really a magnificent place to run.”

More than 600 racers from 20 states took part in the XTERRA Oak Mountain 5, 10, 21, and 42-kilometer trail runs on a beautiful day at the park. It was nice and cool in the morning for the 7:30 a.m. marathon start and stayed overcast and comfortable for most of the morning before afternoon sunshine warmed up to the high 80’s.

Timothy English from Columbiana and Alison Hulsey of Birmingham won the half-marathon course in 1:35:19 and 1:50:03, respectively. Charles Parrish from Birmingham and Kristina Bennett from Dothan won the 10k race in 47:17 and 58:24, respectively. Ian Carter and Adrienne Macke took top honors in the 5k race.

Saturday’s race was the last in the 2010-2011 XTERRA Alabama Trail Run Series and runners who competed in the 42K and 21K courses earned points. This week XTERRA will tally results and announce age group champions, who will be invited to represent Alabama at the 2011 XTERRA Trail Run National Championship at Ogden, Utah, on Sept. 25.

XTERRA will be back at Oak Mountain in November and next May for more action in the Alabama Series.

Chelsea players head back to the dugout after Mortimer Jordan's game-winning run in the bottom of the 8th inning. (Reporter... read more