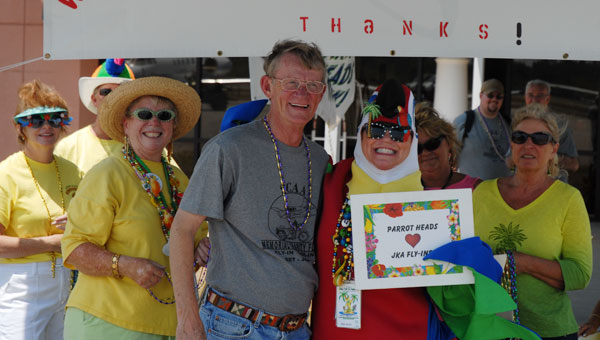 In 2010, Waterville USA General Manager John Turberville began to fear the worst when oil began washing up on the beaches a few miles from his amusement and water park in Gulf Shores.

But as the tourism numbers began to decline throughout the summer of 2010, Turberville began to notice support coming from a dedicated group of visitors from central and north Alabama.

“Without Birmingham and the northern part of the state, last year would have been much worse,” Turberville said as he sat in his office overlooking the water park May 21.

Some of Turberville’s support last year came in the form of a group of Shelby County pilots who dedicated a day to flying from the airport in Alabaster to Gulf Shores to spend as much money as possible in an attempt to stimulate the Gulf’s damaged economy.

So when Turberville heard the same group of pilots were organizing an event this year to benefit those in central and northern Alabama affected by the April 27 tornado outbreak, he did not hesitate to return the favor.

On May 21, a group of about 20 Shelby County pilots flew to Gulf Shores to collect toys, cleaning supplies and canned food goods donated to Gulf Shores’ Jack Edwards Airport.

While the local pilots were there, Turberville allowed the group to collect more donations from Waterville patrons. Everyone who donated an item to the storm victims received a free pass or a reduced-rate admission to the theme and water park.

“It’s a thank-you to the folks who came down here and helped us out last year,” Turberville said. “We had a lot of new people come down here last year just to support us, and now we are trying to help them out.”

When the Shelby County pilots landed at the Jack Edwards Airport, the Lower Alabama Parrothead Club greeted them with Mardi Gras-style bead necklaces, hugs and donations of everything from food to Play-Doh.

“We saw they were collecting toys for the children, and we wanted to help them out,” said Fairhope resident Scott Christmas, who brought his daughter, Kaylea, to Jack Edwards to make a donation and greet the Shelby County pilots.

“They are really doing a good thing here,” Christmas added.

When the pilots returned to the Shelby County Airport late May 21, they added the Gulf Shores donations to the toys and supplies the local airport has been collecting for the past few weeks.

In total, the Shelby County pilots will be able to ship several truck, or plane, loads to hard-hit areas such as Tuscaloosa and Hackleburg, said local pilot Johnny Barnes, who worked to organize the fly-in.

Because the local pilots have been able to help those in need for the past two years, Barnes said he is planning to make the fly-in an annual event.

“Last year, we had the oil spill and this year we had the tornadoes. Hopefully, we won’t have any disasters to help out with next year,” Barnes said.

This year, the Shelby County pilots dedicated their journey to one of their fallen friends, Jerry Hoggatt, who died last year in a plane crash in Colorado.

“He would have loved this (fly in),” said Jerry Hoggatt’s widow, Vanessa. “Once we moved here, he just picked up friends so quickly.

“You guys do not know how much this would have meant to Jerry,” she said to the pilots before they took off.