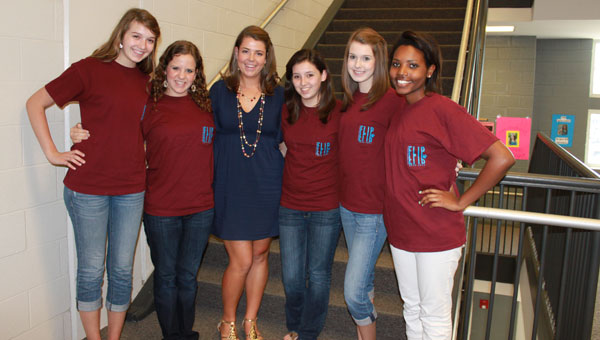 FLIP Club (Freshmen Leaders Improving and Progressing) is a bridge for service-minded eighth-graders as they find their new places as high school freshmen.

“I wanted to be in Peer Helping,” freshman Rebekah Richardson said of a club that mentors elementary school children, “and FLIP Club was a starting point.”

Connolly, 18, said the first year of FLIP Club has been “great.” She said there was nothing for freshmen to do, They get excited for TNT (Teens Need Teens), but they can’t join the club until they are sophomores.

“Some freshmen tend to get lost,” she said of incoming freshmen. “This eases the transition into high school.”

The members of FLIP Club pledge to be drug and alcohol free.

“It’s just worth it,” freshman Emmy Njaaga said. “It occupies my time better. I don’t want to waste my time doing something that won’t mean much.”

“When you make the pledge, you automatically don’t want to do it (drugs and alcohol),” she said.

Connolly, who is a senior, will pass the club leadership to junior Ellen Marsh.

“I’ve enjoyed the experience,” Connolly said. “It takes a lot of time with 58 kids in the group. The club is popular at the middle school, and I was excited to hear that kids were looking forward to joining FLIP Club when they got to high school.

“The club makes freshmen feel a part of Spain Park the second they come in,” she added. “They don’t have to be star athletes to find a place.”

With the valedictorians seated behind her, Hope Christian School Administrator Connie Atchison reads a letter from a parent during the... read more