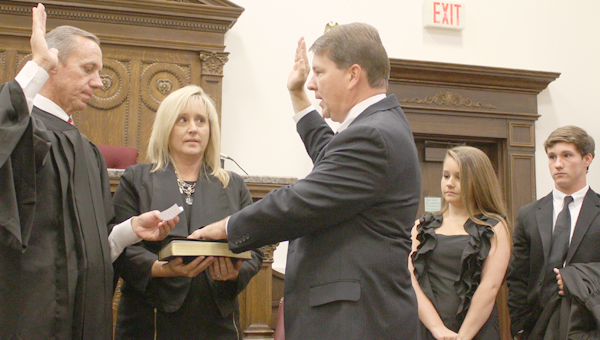 Judge Michael Joiner (left) administers the oath of office to Shelby County Circuit Judge Bill Bostick (center) during a May 19 formal investiture ceremony at the courthouse. Looking on (from left) is Bostick's wife, Tara, daughter Holly and son Bradley. Bill Bostick succeeds Joiner, who now sits on the state's Court of Criminal Appeals.

Friends, family and elected officials attended the May 19 ceremony at the courthouse.

Joiner administered the oath of office to Bostick, who was then robed as a member of the court by wife Tara, son Bradley and daughter Holly.

He was being groomed to succeed Shelby County District Attorney Robby Owens.

When Joiner was appointed in February to the Court of Criminal Appeals, Bostick, at the urging of county leaders, was one of 16 attorneys nominated to the Shelby County Judicial Nominating Commission for consideration.

The commission whittled the list down to three – Bostick, Corey Moore and Richard Shuleva – and forwarded the list to Bentley.

“This was the first time that the process of replacing a judge who left the bench has been used in Shelby County,” Joiner said May 23, referring to the judicial nominating commission.

“They did a very nice job of selecting three good candidates and getting those names to the governor,” Joiner said. “The governor selected Mr. Bostick, which is a good selection on behalf of the governor, I’m sure.”

During his time as Shelby County’s presiding judge, Joiner helped design legislation leading to the formation of the nominating commission.

“At the time I did it, I thought this would be great to replace some of my colleagues when they left or retired,” Joiner said. “I never thought I’d be the one being replaced.”