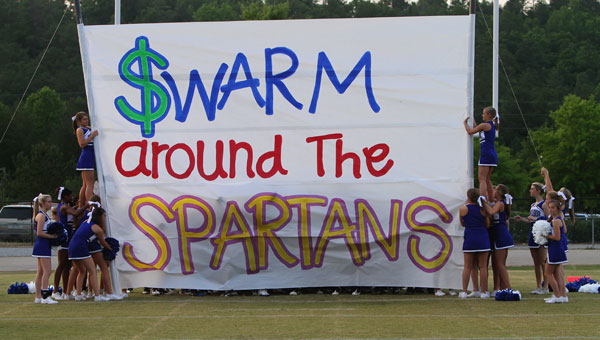 Chelsea cheerleaders welcome the Pleasant Grove Spartans to Chelsea on May 20. (Contributed/Cari Dean)

CHELSEA – The citizens of Chelsea showed true hospitality to the residents of tornado-damaged Pleasant Grove as the Chelsea High School football team played Pleasant Grove in a spring scrimmage.

“A whole bunch of folks” were involved in giving the Pleasant Grove fans a “night of normalcy,” Chelsea football coach Wade Waldrop said. “We decided a few weeks back, before the storms, it would be at typical jamboree. After the storms, we weren’t sure if we were still going to play. They told us there was no way they weren’t going to play. They wanted to be in school and athletics and doing the things kids enjoy doing.”

After hearing the game was still scheduled, Chelsea students and citizens alike began to ask how they could help their northern neighbors.

PTO President Kim Daniels decided to put donation boxes around the high school on Wednesday, May 18, requesting the students to contribute change.

“The students and cheerleaders, who did other fundraising, donated $1,069.27 as of Friday (May 20) to give to Pleasant Grove,” Daniels said. “That was just from students over three days. We’re not a huge school, and I thought that was outstanding.”

Daniels also had the donation buckets inside the gate at the football game and asked for donations from attendees. Those donations along $843.62. With the PTO’s donations, the school contributed over $2,400 to the tornado-relief efforts in Pleasant Grove.

“It was a good night. Fun to play football, but I think they really appreciated it,” Daniels said. “It’s always good when kids and students can understand they can do a difference and help. It’s good for students to get to help.”

Waldrop said he met with Chelsea Mayor Earl Niven to determine how to help Pleasant Grove.

“I talked to their coach and our mayor talked to their mayor to see what we could do for their community,” Waldrop said. “We decided financial donation would be the best thing for them. They had all the stuff they needed. They needed workers and, in the long run, needed money.

“We just really wanted to make it one of those nights to let them know we cared,” he added. “We did it just to remind our people how lucky we were.”

By BRAD GASKINS / Staff Writer A Birmingham man is in custody after allegedly burglarizing a home this morning. Shelby... read more