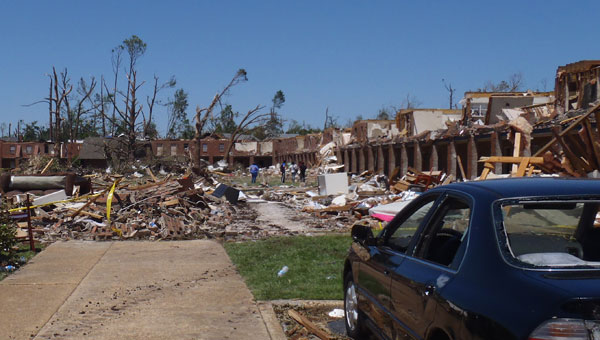 Pelham High School graduate Chelsea Thrash is making steady improvements after she was thrown from the second floor of Tuscaloosa's Charleston Square apartment complex during an April 27 tornado. (Contributed/Susan DeBruin)

Pelham resident Kelle Thrash watched her television with horror April 27 as an enormous line of tornado-producing thunderstorms inched their way closer to the University of Alabama, and more importantly, her daughter, Chelsea, who was a student there.

When a local meteorologist confirmed a tornado on the ground in the heart of Tuscaloosa, and then cut to a live camera feed of the twister on the ground, Kelle Thrash text messaged her daughter and urged her to seek safety from the storm.

Like any concerned parent, Kelle Thrash then waited for a phone call to confirm her daughter had escaped the devastation safely. But when she noticed an incoming call from Chelsea about 20 minutes after the storm hit, the voice on the other end shared information no parent wants to hear.

“That wasn’t the phone call I was expecting,” Kelle Thrash said. “Chelsea was on the other end, but someone had found her cell phone about 5 feet from her and brought it over to her so she could call me.

“She said ‘Mom, I’m alive, but I can’t feel my legs,’” Kelle Thrash said. “And while we were still talking on the phone, I could hear the sirens in the background. Of course, I completely freaked out.”

When the tornado hit, Chelsea, a 2009 graduate of Pelham High School, was studying for final exams in her boyfriend’s apartment in Tuscaloosa’s Charleston Square apartment complex.

The twister leveled the building Chelsea was in, and tossed her into the complex’s common area.

“One of Chelsea’s sorority sisters was also living in the same apartment complex. Unfortunately, she did not survive,” Kelle Thrash said solemnly. “We are extremely fortunate. Chelsea should not be here.”

On the other side of the apartment complex, UA Health Sciences Library Assistant Susan DeBruin and her husband had also ridden out the storm. Although the roof over their unit was torn off, the structure was still standing.

Immediately after the storm was over, the DeBruins rushed outside to help their less-fortunate neighbors. About 20 minutes after they began searching the complex, the DeBruins found Chelsea being watched over by three men who also came to help.

“We were scared to move her. We thought she was paralyzed for life,” said DeBruin said. “We heard that another tornado was coming, so one of the guys found a table, ripped three of the legs off and kicked off the other one.”

The DeBruin’s then used the table as a makeshift stretcher to load Chelsea into a waiting pickup truck, which transported her to the Druid City Hospital storm triage center.

After waiting until the tornado threat in Pelham had passed, the Thrashes drove to DCH, where they learned Chelsea’s L1 vertebrae had been shattered “into a million pieces,” and her spine had been shifted out of alignment, Kelle Thrash said.

Chelsea underwent surgery at UAB Hospital, and moved to a local rehabilitation center about two weeks ago. She has slowly regained mobility, and was able to walk 75 feet on May 23 for the first time since the storm.

“The doctors said the outcome looks good for her to make a full recovery,” Kelle Thrash said. “God has a fantastic plan for her.

“She’s already worried about getting registered for her classes in the fall,” Kelle Thrash added with a laugh. “Taking things one day and one week at a time is driving her crazy.”