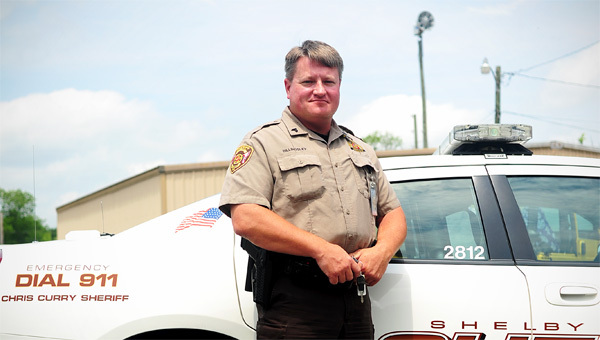 From patrolling the county as a lawman to serving his country overseas to spearheading Columbiana’s efforts to bring tornado sirens to the city, the Shelby County sheriff’s office patrol supervisor has seemingly done it all.

And, in his spare time, managed to complete a four-year college degree.

He received a bachelor’s degree – with a concentration in criminal justice – in 2009 after completing online coursework through the American Military University.

Billingsley, 43, was honored by his Alma mater earlier this month as the school’s first recipient of the Alumni Community Service Award.

“It’s almost hard to put into words,” he said of the honor. “It’s so unexpected.”

Billingsley received his associate’s degree from Jefferson State in 2004. Attending class was a struggle.

A couple weeks after the 2001 Fall semester began, Billingsley was put on active duty as part of Operation Noble Eagle, America’s effort to secure the homeland after 9/11.

“You do it because deep down inside you want to help people,” he said. “We want to get the bad guys who try to take advantage of innocent people. It’s a very satisfying job.”

It’s also a family tradition for the third generation lawman.

It started with his dad, Billy, being drafted to serve as a military policeman in Korea. Grandfather W.C. “Bill” Billingsley followed suit in 1963, joining the Columbiana Police Department, advancing to chief and ending his career as a jailer with the sheriff’s office.

Born and raised in Shelby County, Billingsley said it’s his duty to keep the county safe and enjoyable.

“We take it personally,” he said of sheriff’s employees. “The areas that we work, we claim them as our own, whether we live there or not.”

Billingsley served on the Columbiana City Council from 2000-2007 and was chairman of the public safety committee. He said he realized the city lacked tornado sirens and was generally unprepared to respond to such a disaster.

He worked with the police and fire departments and FEMA to bring sirens and a standard response plan to the city. The paperwork to do so was filed before he was deployed to the Pakistan border in 2007 to help train Afghanistan police forces.

Before leaving, he bowed out of SWAT team service after 10 years on the force.

“Lucky I did,” he said. “I wasn’t planning on getting injured over there.”

Walking 10,000 feet above sea level in rugged terrain with a 100-pound pack on his back, he stepped on a rock the wrong way. The result was an injured knee, three crushed vertebrae, two herniated disks in his neck and chest pains.

While in Afghanistan, he learned FEMA had declared Columbiana “Storm Prepared.” At that time, he said, Montgomery was the only other city in the state to have that designation.

“Tim always had the good of the community at heart,” Columbiana Mayor Allan Lowe said. “With Tim, we always knew that public service was a priority. We know that if a situation arises in which disaster preparedness or reaction to a natural or man made disaster occurs, we can look to Tim for his expertise.”

Billingsley’s goal throughout the rehabilitation process was to be physically capable to return to the sheriff’s office as an effective patrol supervisor. He feared the injuries had made him a hindrance.

That wasn’t the case.

He returned as a patrol supervisor and “exemplifies the qualities of service and dedication that are the foundation block for employment with the sheriff’s office,” Sheriff Chris Curry said.

He also resumed his online coursework, completing the two remaining courses and proving his wife wrong.

Tracy Billingsley often joked that the couple’s two daughters would get degrees before their dad. Oldest daughter Meagan is a sophomore softball player at the University of Alabama at Huntsville. Kaylyn is a junior tennis player at Shelby County High School.

“Whatever you set your priorities to be, you can make happen,” Billingsley said, noting the four-year degree fulfills a requirement for potential advancement in the sheriff’s office ranks.

Billingsley also was deployed after three natural disasters – two hurricanes and a tornado – with the Pelham-based Bravo Company 167 Infantry.

Still, he said, the community service award from his Alma mater was a shocker.

“I figured there were people that had done so much more,” Billingsley said.