Chelsea native fishing for a championship 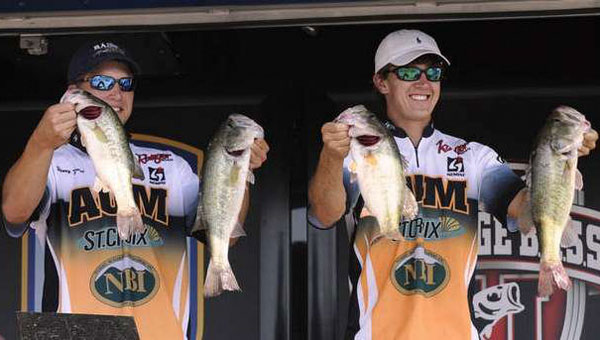 Chelsea native Henry Foster (Left) and teammate Corey Pierce display the bass they caught in a B.A.S.S. East Super Regional tournament May 21 on the Alabama River. The pair will represent the Auburn University in Montgomery in the B.A.S.S. National Championship tournament in July. (Contributed)

Henry Foster, a native of Chelsea, teamed up with Corey Pierce of Prattville to help Auburn University in Montgomery finish runner-up in the B.A.S.S. East Super Regional tournament May 21 on the Alabama River.

Foster, 20, and Pierce will represent AUM in the B.A.S.S. National Championship in Little Rock, Ark. on July 7-9 following the second place finish in the two-day super regional.

The duo from AUM finished second with a final weight of 27 pounds, 8 ounces of bass in the super regional. Foster and Pierce were edged by just less than one pound of bass by a team from the University of Mississippi.

Both teams are one step closer to the ultimate win in this collegiate bass fishing league, which is a history-making slot for one angler at the 2012 Bassmaster Classic. The next step toward earning that goal is the Collegiate B.A.S.S. National Championship, where the top teams from three regional competitions will compete in an elimination-format for the Classic berth.

Pierce and Foster’s post-spawn pattern focused on staging areas used by the outbound fish from shallow water in the super regional on the Alabama River.

The team strategy began each morning with a yellow/black Spro Frog fished atop submerged grass beds. Midmorning sunshine moved the fish to deeper water, forcing a switch to a watermelon/red Texas-rigged Zoom lizard, rigged Texas style with a ¼-ounce weight.

“The key was fishing the jig and worm on the deep side of the cover,” said Foster, a business management major at AUM. “We never got a bite fishing the shallow end, making us believe the fish were on moving, postspawn action.”

FROM STAFF REPORTS The University of Montevallo women’s tennis team had one athlete named to the Peach Belt Conference All-Academic... read more