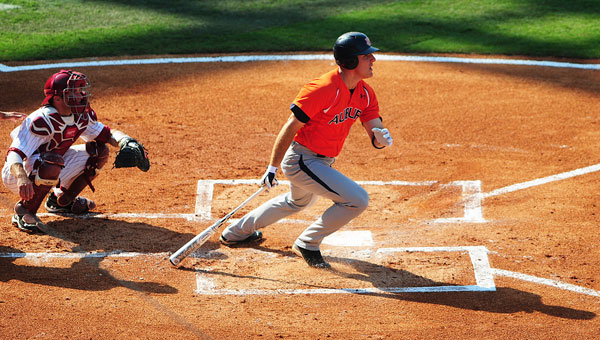 Former Oak Mountain High School baseball standout Kevin Patterson, a senior at Auburn University, heads to first base after smacking a two-run double to the right field wall in the first inning of a quarterfinal game against South Carolina in the Southeastern Conference baseball tournament May 25 at Regions Park. (Reporter Photo/Jon Goering)

Patterson, in his senior season with the Auburn Tigers, handled it well in his first two plate appearances against top-ranked South Carolina in the tournament quarterfinals May 25.

Patterson smacked a two-run double to the right field wall on a 2-2 count in the top of the first inning to give Auburn a 3-1 lead early in the game. The double was Patterson’s 16th of the season, which is second on the team, and gave him 43 RBIs for the season.

Patterson, who is also tied for the team lead in home runs, added a bloop single to center field on a 3-2 count in the top of the fourth inning in his second at bat.

Meanwhile, South Carolina erased the early two-run deficit in a 7-3 victory over Auburn. Patterson finished 2-for-4 at the plate and drove in two runs for the Tigers in the defeat.

Auburn was eliminated from contention for a berth in the NCAA tournament following a 3-2 loss to Georgia in a consolation game at the SEC tournament May 26.

Patterson finished 0-for-4 at the plate with two strikeouts in the loss to Georgia in his final game wearing an Auburn uniform.

Auburn relief pitcher Bradley Hendrix, also a former standout at Oak Mountain, did not pitch in either game at the SEC tournament.

Patterson, who has been drafted in the Major League Baseball Draft twice, is hitting .278 with eight homers and 43 RBIs for the Tigers in his senior season.

Hendrix, who currently has a 2-1 record with a 4.82 earned run average in 13 appearances, including three starts, was drafted in the 30th round of the 2010 MLB Draft by the Cincinnati Reds following his junior season at Auburn.

Hendrix finished his junior season with a 4-2 record and a 5.35 earned run average in 22 relief appearances.

Chelsea native fishing for a championship