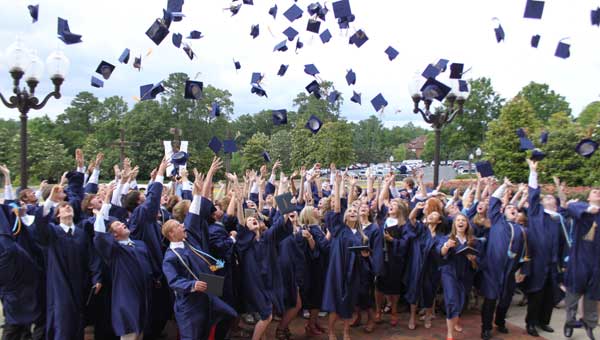 This week, hundreds of high school seniors walked across various stages across the county to receive their diploma. As hats were tossed in the air, students entered a new stage of life headed for college or future jobs and careers.

Thompson Class President and 2011 graduate Katie Ethridge said although she’s been accepted into the University of Mississippi, high school graduation was still bittersweet.

“I’ve been ready to go to college since I first visited Ole Miss,” Ethridge said. “But there is a part of me that is sad to leave it all behind.”

Thompson Principal and High School Coordinator Robin Thomas said the 2011 class has stood out among the rest as being especially generous and thoughtful toward others.

“Our seniors are very generous,” Thomas said. “They rallied around their classmate Josh Carden to build him a new house, they have given a lot of money to the Red Cross, and just this week they each gave at least $1 for ongoing tornado relief efforts. This group of kids have very generous hearts.”

“This group of seniors is big-hearted, care a great deal for each other and take a lot of pride in our school and community,” he said.

As many students move on toward higher education and job opportunities, Pelham Principal Bob Lavett said he hopes the 2011 seniors will continue to be active in their own education.

“We have seen this group of seniors really take an active role in their own education,” he said. “We have been trying to instill in them for several years now that learning is a life-long process, even after you enter the workforce. I have seen this group of students really understand that concept and take a very active role in their education process.”

At the Kingwood Christian School graduation May 24, valedictorian Millie Opper encouraged her classmates to continue making a difference in their community, whether in Shelby County or elsewhere.

“As this chapter comes to an end, an even better one is beginning. A chapter with purpose,” Opper said. “Those who help others are world changers. Little somethings here and there are what change the world.”

Cheeriodicals, a sweet gift of relaxation