Voting for the stars 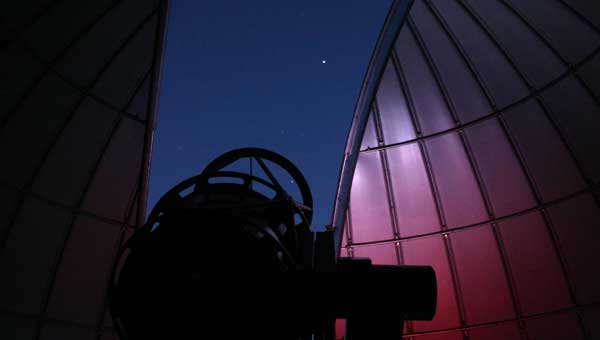 The state-of-the-art telescope and equipment inside the observatory allows students to study the night sky. (Contributed/William Keel)

MONTEVALLO — In the middle of a meadow, surrounded by old construction trash and debris, the University of Montevallo has its own treasure, the James Wylie Shepherd Observatory.

Open since the fall of 2009, the observatory sits in Gentry Springs field, a former construction landfill, and allows students and community members of all ages the chance to study the stars and explore the night sky. 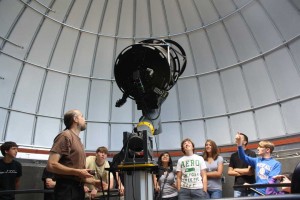 UM Professor Michael Sterner demonstrates the equipment in the observatory to a group of high school students. (Contributed/Annie Chester)

In the same way the observatory has turned an old trash field into and educational gem, students and professors are now attempting to make the entire facility sustainable and environmentally friendly by raising grant money through an online-voting site.

By competing for votes, professor Michael Sterner said the group hopes to raise enough money to install several sustainable design elements they already have, including an 800-gallon drum for converting rainwater into usable drinking water, eight solar panels and two self-composting toilets that will be used to support a garden for the surrounding community.

These elements, as well as the entire observatory facility, were funded through grant money and private donations. However, there is not enough money left over to install the projects, Sterner said.

“These are tough financial times for trying to raise money through the private sector and through grant money,” he said. “Aaron Traywick, one of the UM environmental club students, has done a lot of leg work finding other funding opportunities for us. He is the one who found the True Hero site.”

True Hero is an online voting site that awards money to community service projects based on online votes. As of press time, The UM observatory project was in seventh place in the college projects category with 446 total votes. The first place college project had 849 votes.

The observatory facility is already one-of-a-kind in the Birmingham-metro area, Sterner said. The new sustainable elements would allow the facility to continue supporting the environment and the community.

“We reclaimed some throw away land and we’re off to a good start with keeping everything low impact or no impact as possible,” Sterner said. “More and more of the community and the region are finding out about this facility. It’s a public facility. Anyone can come for free and get a tour of the night sky and look through the telescope.”

“As far as we know, this is a very unique facility,” he added, ”not only in Alabama, but also the country.”