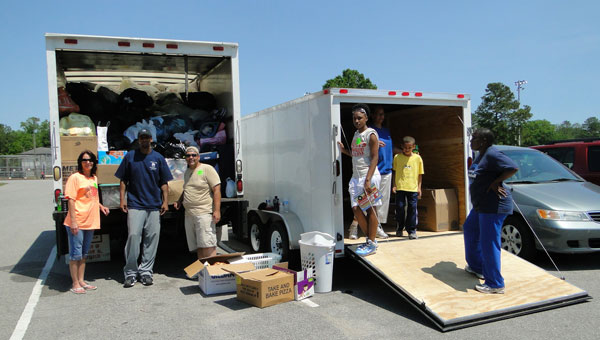 Last summer, Oliver Park was the setting every Tuesday afternoon for the Calera farmers market.

Through support from the city government and citizens of Calera, the market experienced a successful first season.

“Dian, a market patron, wrote Calera market is the ‘Cheers’ version of farmers market — a small hometown market where everybody knows your name. Everyone is friendly and genuinely glad to be there either as a vendor or a buyer. It’s better than having a garden — all the benefits with none of the work!”

In addition to being voted Alabama’s number one market, it was honored as the Market of the Month by the Alabama Farmers Market Authority.

This year’s season began April 30 with the first annual Strawberry Festival. In addition to the festivities, the market was a drop-off location for donations to help tornado victims.

Since the day was already focused on community service, Krueger asked attendees to bring needed items, and everything fell into place.

Volunteers packed a truck and trailer with the donated items.

Stevie Edwards was overwhelmed at the food, clothing, hygiene, first-aid and other items given to the Red Cross for distribution.

“The volunteers have not stopped all day,” Edwards said. “The generosity of Calera and surrounding communities speaks well of lending a hand in time of need.”

LifeSouth collected 25 pints of blood and turned another 25 away. Donor recruiter Keith Johnson explained they had worked non-stop since April 27.

“We are pleased with the outpouring of love and concern for neighbors affected by the storm — it’s awesome,” Johnson said. “Although we had to turn donors away, we always have an urgent need for blood in the central Alabama area. We’ll be here two more times this summer, so I encourage those turned away to come back to Calera market June 28 or August 23.”

The summer season begins Tuesday, June 7 from 3 p.m.-6 p.m. Market will be held every Tuesday through the end of August.