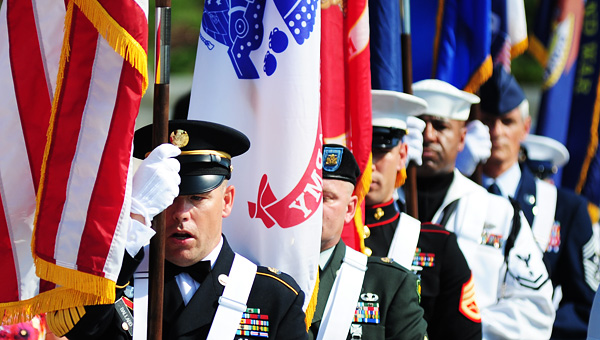 The All Service Color Guard presents the colors at the beginning of the Memorial Day ceremony at Alabama National Cemetery on May 30. (Reporter Photo/Jon Goering)

Hundreds endured an hour in the sweltering sun to pay tribute to loved ones who gave their lives in service.

According to Bob Barefield, chairman of the ALNC support committee, Bachus authorized and advocated the construction of the Alabama National Cemetery in Montevallo. 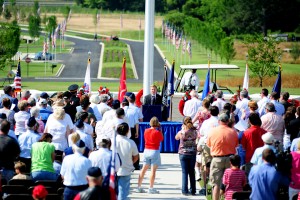 The crowd gives Spencer Bachus, R-Ala., a standing ovation as he takes the podium to deliver his keynote speech. (Reporter Photo/Jon Goering)

This year, guests had the opportunity to see the cemetery’s improvements after an 18-month construction project.

“I have to admit we had a lot of good days,” Whitehead said. “If I had to do it all over again, I would want the same team.”

“Welcome to what I think is one of the best cemeteries in our system,” English said. “My wife and I decided that this would be our final resting place.”

English said all the stonework is comprised of stone quarried in Alabama and placed by men and women born and raised in Alabama.

“These heroes were also brothers and sisters, fathers and mothers, sons and daughters and children,” Bachus said. “May God bless them all, and may God bless America.”

The ceremony concluded with a wreath laying ceremony, benediction, rifle salute and “Taps.” 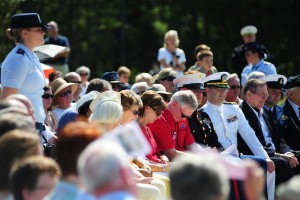 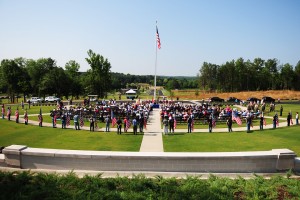 Participants and spectators gather in the Alabama National Cemetery at American Village in Montevallo for a Memorial Day Ceremony on May 30. (Reporter Photo/Jon Goering) 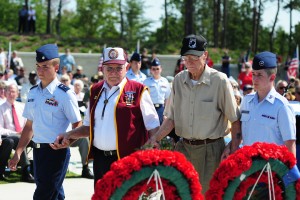 Members of the POW/MIA organization are escorted to a wreath in the honor of their organization by members of the Civil Air Patrol during a Memorial Day ceremony at the Alabama National Cemetery at American Village. (Reporter Photo/Jon Goering)

The seventh annual Blue Star Salute began at 11:30 a.m. at the American Village in Montevallo.

Baird again provided opening and closing remarks for this tribute to the men and women of the U.S. Armed Forces. 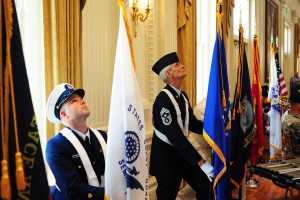 Members of the color guard place the flags in their supports during Monday's ceremony at Liberty Hall. (Reporter Photo/Jon Goering)

The foundation presented an award to retired Army officer Noah Galloway of Alabaster for his selfless service. Galloway was wounded in Iraq.

“I accept this on behalf of the men I served with,” Galloway said. “In my mind, I have nothing to complain about.” 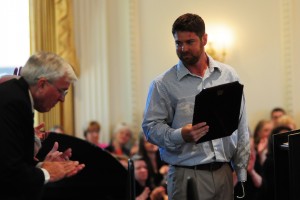 Army officer Noah Galloway returns to his seat after being honored during Monday's ceremony at Liberty Hall. (Reporter Photo/Jon Goering)