Mr. and Mrs. Ted Crockett of Hoover are proud to announce the marriage of their daughter, Elizabeth Gaines Crockett, to Mr. Robert Nicholas Watkins of Hartselle on March 26, 2011.

Elizabeth is the granddaughter of Bernice Parker and Stanley Crockett and the late Audrey Booth Crockett. She graduated from Briarwood Christian School, followed by the University of Alabama. 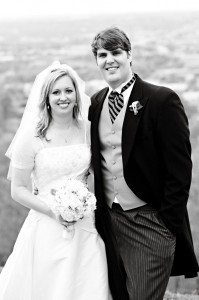 The wedding took place at The Club in Birmingham at noon. The flowers were hand-tied bouquets of cream roses, hydrangeas and blue stock.

Vining-Walker Ed and Dian Vining are proud to announce the marriage of their daughter, Emily Vining, to Mr. Kevin Walker... read more