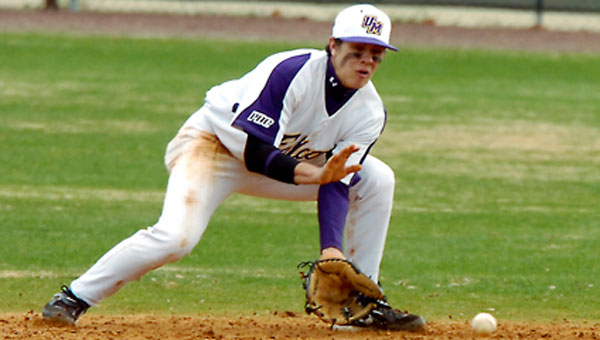 University of Montevallo sophomore Austin Dubberly, a Pelham High School graduate, is one of 10 Falcons headed to a collegiate baseball league this summer. (Contributed)

Five Montevallo players will participate in the Northwoods League.

Teammates Will Fulmer and Alex Guilford will play for the Alexandria Beetles in Alexandria, Minn.

Fulmer, a freshman infielder, finished his first season with the Falcons batting .321 with two homers and 16 RBIs. Guilford, a freshman left-handed pitcher, compiled a 5-3 record with a 4.59 earned run average in 18 appearances, including 10 starts, on the mound.

Sophomore right-handed pitcher Will Dismukes, who finished with a 3-6 record and a 5.42 ERA in 14 appearances, including 13 starts, on the mound will play for the Duluth Huskies in Duluth, Minn.

Sophomore right-handed pitcher Michael Shreves, who compiled a 1-2 mark with a 7.41 ERA in 15 appearances, including three starts, will play for the Willmar Stingers in Willmar, Minn.

Junior outfielder Chris Ross, a Pelham High School graduate, will play for the Mankato Moondogs in Mankato, Minn. Ross finished his season with a team-leading .405 batting average with two homers and 19 RBIs.

Sophomore infielder Austin Dubberly, also a Pelham High School graduate, will participate in the New York Collegiate Baseball League. Dubberly, who finished the season with a .364 batting average, eight homers and a team-best 40 RBIs, will play for the Alfred Thunder in Alfred, N.Y.

Teammates Devon Davis and Wes Rich will play for the Butler Blue Sox in the Prospect Collegiate League in Butler, Penn.

Davis, a sophomore left-handed pitcher/first baseman, completed the season with a 0-1 record on the mound with a 7.11 earned run average in 16 appearances, including 16 starts. Davis also batted .227 and drove in 11 runs at the plate.

Rich, a Pelham High School graduate, is a junior left-handed pitcher for the Falcons. Rich finished the 2011 season with a 1-2 record and a 3.78 ERA in 25 appearances.

Freshman right-handed pitcher Edward Brandsema, who compiled a 1-1 record with a 2.91 ERA in 22 appearances this spring, will play for the Orlando Freedom in the Florida Collegiate League.

Kirk Waligora, a senior outfielder who didn’t play this spring, will play for the Spartanburg Spartans in the Southern Collegiate League.

FROM STAFF REPORTS The University of Montevallo women’s tennis team had one athlete named to the Peach Belt Conference All-Academic... read more