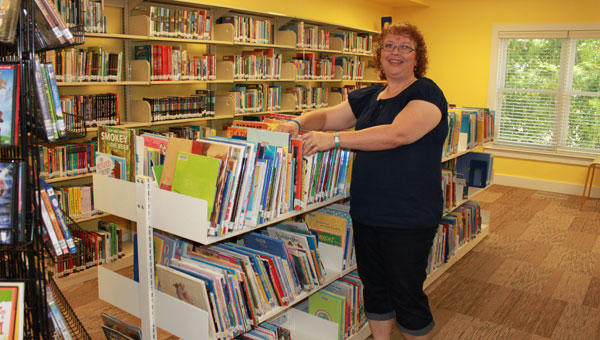 Dana Polk has been Chelsea's librarian since the library opened in 2001. (Reporter photo/Christine Boatwright)

CHELSEA – The Chelsea Public Library moved from a one-room space in Chelsea City Hall to the 100-year-old Crane House with multiple rooms and original wood floors.

Librarian Dana Polk personally manned a hand truck to assist in toting hundreds of books across the Chelsea City Hall parking lot to their new home, which, incidentally, is the oldest home in Chelsea.

“We spent a lot of time and tears figuring out where to put the shelves,” Polk said. “It’s taken a lot of getting used to. There’s bunches of space now.”

The former Chelsea Library was a single room, and the books quickly outgrew the space.

“Two years ago, we were slap out of room,” Polk said. “I had books on tops of shelves. I eventually gave up three-fourths of my office, portioned off with shelves, for the audio books and DVDs.”

In addition to a new library location, the city of Chelsea has plans to finish the park in front of the library with a play area and gazebo, Polk said.

“This is a very welcoming place,” Polk said. “Every community needs to have a gathering place. We have programming to bring the community together. It’s supposed to be quiet and relaxing.”

Polk will hold reading programs for children, young adults and adults throughout the summer. For more information, visit Cityofchelsea.com/library.html. The library is located next to Chelsea City Hall at 11611 Chelsea Road, Chelsea.

Ward pleased with plan to keep Chilton in 6th District

By NEAL WAGNER / City Editor An Alabaster state senator said he was pleased with a redistricting plan passed by... read more