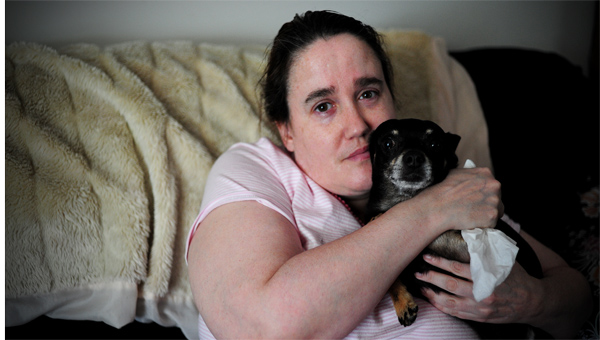 Clare Lamb holds Quila, a 7-year-old Chihuahua who saved the life of this Calera resident by alerting family members of Lamb having a seizure. (Reporter Photo/Jon Goering)

CALERA – An alert family dog helped save the life of a Calera woman earlier this week.

Quila, a 7-year-old Chihuahua, saw Clare Lamb having a seizure in the master bedroom, and quickly alerted family members in other parts of the house.

Lamb, 43, was rushed to the Shelby Baptist Medical Center emergency room and spent two days in the hospital.

Had she gone unnoticed in her bedroom for another few minutes, she would have died, hospital staff told Terry Lamb, Clare’s husband of 20 years.

The incident began about 10:30 p.m. on May 30 – Memorial Day night – at the couple’s home in the Waterford subdivision off Highway 70.

Clare Lamb was alone in the master bedroom. Terry Lamb was in another part of the house checking email. The couple’s son, Andrew Lamb, a recent graduate of Calera High School, was in his room on the computer.

Quila quickly entered Andrew Lamb’s room and scratched at Andrew’s leg. Each time Andrew looked at the dog, the dog would start walking toward the bedroom door.

Eventually, the dog got Andrew’s attention, and Andrew followed the dog to the master bedroom. It was a frightening site, he said.

Andrew quickly yelled for Terry, who rushed to the bedroom and saw his wife lying halfway off the bed, near death.

“Her skin was ice cold,” said Terry Lamb, who is retired from the Air Force. “It was like touching a dead person.

“I’m literally having to yell at her to get her attention,” Terry Lamb added. “I pulled her eyes open and her pupils were so small you couldn’t have stuck a pin in them. Her lips were solid blue. All she could do was groan.”

Clare Lamb was in the hospital through June 1.

Quila has his own medical issues. Born with degenerative bone disease, the dog suffers from an enlarged heart. The Lambs adopted him at 5 weeks old from a rescue facility in Panama City, Fla.

Quila is protective of Clare Lamb.

“He loves his mommy,” Terry Lamb said. “If you are a male and you walk in this home and you get near her, you will know about it. He doesn’t like people messing with mommy that he doesn’t know. He’s nipped many an ankle, even my friends.”

In addition to Quila, the couple also has a 3-year-old Chihuahua named Mitzy, a rescue from the Maylene area.

Dana Polk has been Chelsea's librarian since the library opened in 2001. (Reporter photo/Christine Boatwright) By CHRISTINE BOATWRIGHT / Staff... read more