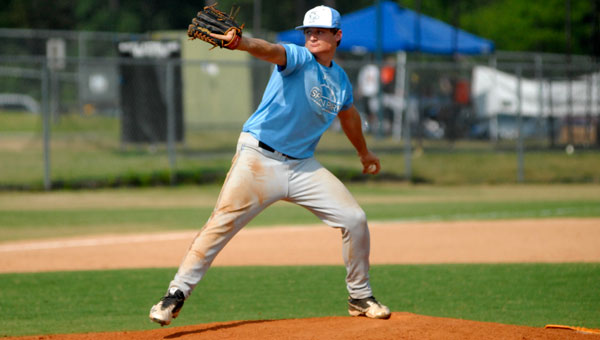 Cowart will have a lot of weight on his shoulder next spring, but he will be able to look back at a trial run against a potent Thompson lineup in the Hoover National High School Baseball Showcase tournament June 3 at the Spain Park Sports Complex for comfort.

Cowart, who is in line for a bigger role after making a few spot starts and relief appearances during his first two seasons at Spain Park, shut down the Warriors in a 2-0 win in tournament action June 3 in a five-inning game after giving up just two hits with five strikeouts and only one walk.

The game highlighted the only matchup between the two Shelby County teams participating in the tournament, which featured some of the best teams in the Southeast.

Spain Park rising senior Hunter Kahn led the Jaguars at the plate as he finished 2-for-3 with a double and a single.

Brandon Marley, D.A. Shepherd, Josh Close and Cowart added a single each in the victory. Grant Veteto and Cowart drove in one run each. Hunter Hall and Shepherd scored one run each.

Davis Cox led Thompson at the plate as he finished 1-for-2 with a double. Steven Powers added a single for the Warriors.

Cowart helped his cause on the mound in the top of the first inning when he drove in Hall with an RBI single to right field to give the Jaguars a 1-0 lead.

Kahn led off the top of the second inning with a double to left field before being stranded on base.

Cowart sat down the first eight Thompson batters he faced before Cox lined a double to the left-center field gap with two outs in the bottom of the third inning. Cox was left on base following a fly out to end the inning.

Shepherd led off the inning with a single to left field before Avans struck out back-to-back batters. Avans then issued three consecutive walks, including a run-scoring walk to Veteto to give the Jaguars a 2-0 lead.

Powers led off the bottom of the fifth inning with a single to left field before he was caught too far off first base on a line drive and couldn’t tag up.

Thompson relief pitcher Tyler Gamble allowed two walks and recorded two outs in the top of the sixth inning before the game was called due to the one hour and 30 minute time limit.

The tournament included several of the top AHSAA Class 6A teams in the state, as well as a team from Georgia that won a state championship a year ago and one of the top teams from Florida.