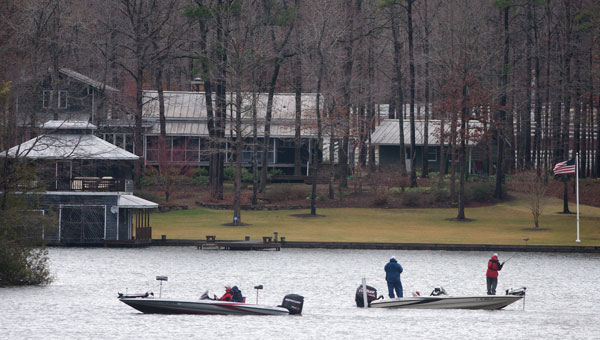 Anglers competing in the Bassmasters Competition on Lay Lake cast in search of fish on March 5. (Reporter Photo/Jon Goering)

By DREW GRANTHUM / For the Reporter

All throughout Alabama history, the Coosa River has been the backdrop to quite a few legendary stories. From Desoto’s expeditions, to major fishing tournaments, to sightings of river monsters and giant fish, the Coosa has seen it all.

While there are no steamboats rolling today, the beauty and tranquility that is the Coosa still inspires people and draws them in flocks to its banks. With six lakes across 280 miles of river, the Coosa is ideal for those looking to fish, swim, boat or just get outdoors.

Yet all is not well with the river. Those close to the river are keeping an eye on the environmental concerns, while acknowledging that the recreational and educational benefits are spectacular.

A major area of concern is the amount of garbage that has found its way into the Coosa.

“It’s amazing what we get out of the lake,” said Judy Jones, Lay Lake’s clean up event coordinator. “We’ve picked up TV’s, sofas, the amount of garbage is unbelievable.”

The Lay Lake annual clean up takes place in April and is done in partnership with Alabama Power. The clean up lasts from Saturday to Sunday, Jones said.

“Just for Shelby County, for one week, we pulled in nine tons of garbage,” she said. “Nine tons is a lot, but we’ve gotten 24 tons before.”

Jones stressed that keeping the lake clean was imperative, not just for those who live there, but also for the area as a whole.

“If we don’t clean up, we’re going to ruin a beautiful lake,” she said.

In addition to trash being an issue, a recent report indicated that many species of animals found in the Coosa were becoming extinct.

In 2010, the American Rivers organization published a list of the ten most endangered rivers in America. The Coosa was listed at No. 10, because the organization claimed the hydroelectric dams along the river caused harm to the ecosystem of the river.

When the river was impounded, it led to the change of environment for several of the snails and mussels that lived in the river according to Outdoor Alabama, the website maintained by the State Department of Conservation.

Alabama Power acknowledged that the dams have changed the river, but officials don’t agree with the claims American Rivers made.

“While we would not suggest that the dams did not change the river, we do take issue with the characterization that the river is endangered,” said Keisa Sharpe, a spokesperson for Alabama Power. “Much of the original dislocation and, in some instances, extinction of species occurred as far back as the late 1800s when navigation dams were first constructed.”

Sharpe also said that the dams were not the only causes of change in the land, but that Alabama Power is taking an active hand in trying to help the ecosystems of the river through partnerships like Renew Our Rivers.

Through a dam relicensing process, Alabama Power is working to improve the quality of life for the Coosa’s local creatures, Sharpe said.

She said improvements have already been seen, as evidenced by the reemergence of the tulotoma snail, once listed as endangered.

“The Coosa River is a very important asset to our county. The river allows us to continue to grow and develop our communities,” he said. “We are the top designation in the state to live as recorded by many services and entities. Even more importantly, we are striving to be a destination to start or grow a business.”

Even fishing is big business on the Coosa. Lay Lake hosted the Bassmaster’s Classic in 1996, 2002, 2007, and 2010. Dudchock said having the tournament at the lake gave the county even more visibility.

“It an important promotional event for our county and the body of water itself,” he said. “The ESPN TV world coverage of the event helped us with international companies.”

Lay Lake is impounded by a hydroelectric power plant, which services the areas around it. Officials are quick to point out that without the Coosa there is no power.

“The Coosa River has been a part of Alabama Power since its early beginnings,” Sharpe said. “Lay Dam was the first major generating facility built by APC.”

Shelby County treats water from the Coosa at two different points, and these are used to supply water into the Shelby County Water Services system. The system serves both wholesale and retail accounts, and also provides assistance in case of drought, Dudchock said.

What does the future hold?

The Coosa still rolls on after all these years, people still enamored by its beauty. It’s arguable that the river is just as important today as it was back when the steamboat was king. Now, however, instead of being the main mode of transporting goods, it is a source of power for the surrounding areas, it provides a means of escaping the hustle and bustle of everyday life, and it is a dynamic force behind Shelby County’s economy.

But are the environmental concerns enough to worry about the future of the river?

Jones believes the future of the Coosa depends on the attitudes of river goers today.

“We’re trying to get people to realize [the dangers of pollution],” she said. “We’re trying to keep this [river] clean for our future; our grandkids. If we keep sinking trash, eventually the lakes will fill up.”