Pat, a resident of Westover since the late ‘80s, is active as the leader of the Dystonia Support Group of Alabama. She is affected by this disease, but said she is very blessed that she has no pain like many others.

Pat is not only active in this effort, but is involved in many civic, church and community organizations that are reaching out to others in time of need. 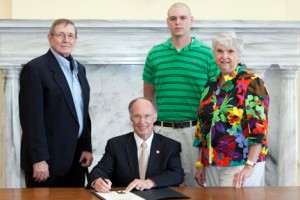 Pat began noticing symptoms after a car accident in 1972, but it took years to get diagnosed. Pat said she has been through acupuncture, therapy and medications in an effort to get some relief.

There are also treatments available including Botox and several types of surgery she has not tried.

If you have never heard of Dystonia, it is the third most common neurological movement disorder following tremors and Parkinson’s disease.

Dystonia can affect any part of the body and affects adults and children of all backgrounds. This disease can cause severe muscle spasms in the neck, arms, legs, face, feet or even vocal cords. Symptoms can be similar but not always the same in each case. Pat said 10-15 years ago people would just say it is all in your mind.

The purpose of Dystonia Awareness Week is to further educate the public concerning this disease, help people to be aware of the symptoms, treatments available and to encourage patients and family members to join the local Alabama Dystonia Support Group. The group meets the third Saturday of each month at 10 a.m. at Lakeshore in Birmingham.

The months of June and July, and November and December are combined in order to hold a covered dish dinner for family members.

Pat said it is very important to gain family support because of the emotional stress of this disease, and anyone interested in learning more about it is welcome to attend the meetings.

Although no cure currently exists, great progress is being made in Dystonia research.

Our thanks to Pat, and the many others involved in making this local support group available, and a vital part of the families who have been stricken with this disease.

After all these years, why can’t you make it…