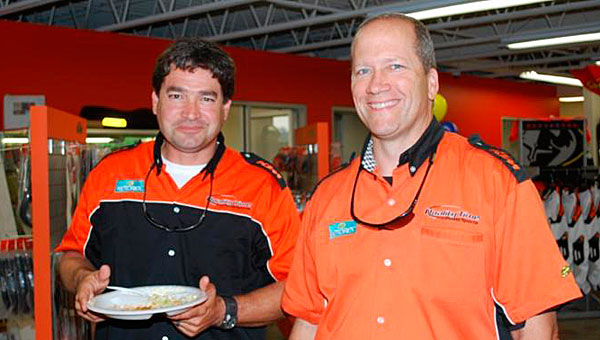 When Andy Thurmond, owner of Quality Time Powersports in Pelham, entered the former Southeastern Meats building off U.S. 31 for the first time, he did not see a long-vacant building full of broken floors and in need of a new paint job.

He saw a wide-open, 7,500-square-foot facility featuring freestanding ceilings and plenty of room to house everything from riding gear to a service department.

“We had been looking for a place to rent or buy when we ran across this building,” Thurmond said. “After we decided to move the business there, we spent a lot of time deciding whether we were going to work with what was there or gut it and basically start over.

“We ended up choosing the second option,” Thurmond said. “Southeastern Meats had busted up the floors pretty good so they could have drainage for their freezers.”

Because the front half of the building featured an open floor plan and freestanding ceilings, it was an ideal location to house a showroom and sales center, Thurmond said. The back half of the building featured warehouse area well-suited for a motorcycle, ATV and dirtbike service area, which is operated by Chad Parrish, the former owner of Action Motorsports in Clanton.

While crews worked to repaint, renovate and transform the former butcher’s shop into a powersports store and hangout, the company operated out of a temporary location near the Pelham Industrial Park.

When the renovations were completed, the building featured smooth concrete floors, a sales desk featuring display cases for everything from hats to shocks and a largely orange-and-black décor representing one of the store’s biggest lines: KTM.

“KTM is the most premier motorcycle you can buy, by far,” said Quality Time Powersports Sales Manager Mark Lewis. “It’s the Mercedes or Porche of motorcycles.”

The store also carries Husaberg dirt bikes, and a plethora of other powersport-related products from companies such as Moose Racing, Enduro Engineering and Joe Rocket.

Lewis and Thurmond said they have firsthand knowledge of nearly every product they sell, as many who are involved with the store also compete in races and other events.

“We got second overall, behind the factory KTM team, which is basically the best riders in the world,” Lewis said. “It was an awesome deal for us. We see that as a huge accomplishment.”

Since the business, which is located at 3031 Pelham Parkway, opened, it has become a hangout for many of the area’s powersport enthusiasts, Thurmond said.

“One of the comments someone made at our grand opening was that people come here to hang out. They don’t just come here to buy something or get a free hamburger and then leave,” Thurmond said. “I viewed that as a sincere compliment.”