Mary Elizabeth Cobb and Kevin Andrew Eddings were united in marriage on June 4, 2011 at 6:30 p.m. in the garden of the Wilson-Winslett Residence at 5621 Crestwood Boulevard, Birmingham.

Parents of the bride are Ms. Lucy Childress Blake of Calera and Mr. Mark Cobb of Birmingham. Parents of the groom are Mr. and Mrs. Leo Eddings of Alabaster.

Given in marriage by her father, the bride wore a strapless ivory satin a-line, pleated gown with scalloped edge hem and long train. Maid of honor was Candice Nelson of Hoover. Flower girls were Elizabeth and Bella Lovell nieces of the groom. 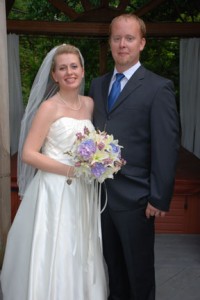 The best man was Justin Doucette from Hoover. Ring bearers were Kyle Eddings and Mason Adam Cobb, nephews of the bride and groom. Ushers were Adam Cobb and David Blake, brothers of the bride and Dean Lovell brother-in-law of the groom.

The Reverend Sarah Jackson-Shelton officiated the ceremony. Musical accompanist was done by Mr. Jeremy Arthur. Reception was held in the home after the ceremony. The couple will reside in Hoover.

Lenny and Jane Capuano of Broadview Heights, Ohio are proud to announce the marriage of their daughter, Angela Capuano, to... read more