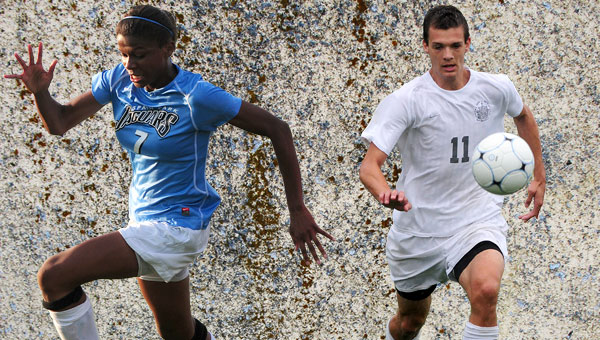 They weren’t alone. So did the rest of the competition for high school soccer Player of the Year honors in Shelby County during the 2011 season.

Charley, who was named the Gatorade Player of the Year following her third season with the Jaguars, and Jamroz, who led the entire nation in goals scored this past season while setting multiple Alabama High School Athletic Association scoring records, were runaway picks as Shelby County’s top soccer players.

Charley became the third consecutive Spain Park player to be honored as the state’s Gatorade Player of the Year in three years after she led the Jaguars to a third consecutive AHSAA Class 6A girls’ soccer championship last month. Charley was the fifth Spain Park player to win the award and earned the school’s sixth Gatorade Player of the Year award.

Charley, who led Spain Park in goals scored as a freshman, used her speed to lead the Jaguars with 31 goals as a sophomore. Charley was also effective as a decoy in the Spain Park offensive attack and set up teammates for another 16 goals during the season.

Jamroz cemented his status as one of the best high school soccer players in the state’s history after scoring a record 85 goals as a senior, which broke the AHSAA scoring record across all classifications.

Jamroz, who was named the AHSAA Class 4A-1A state tournament’s most valuable player after leading Indian Springs to a state championship as a freshman, helped his school return to the state title match this season.

Jamroz, who wrapped up his career with a state record 157 goals in his four-year career, was named the Lakeshore tournament’s most valubale player this spring. Jamroz was also named the Birmingham Metro Golden Boot award winner this season.