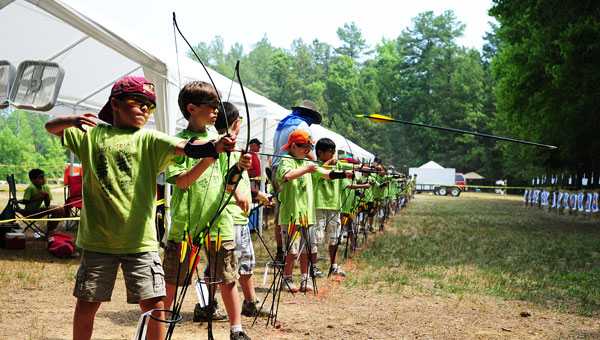 As Shelby District Cub Scout Day Camp Director Jeff Arney walked from station to station June 8 at Oak Mountain State Park, he continually emphasized one rule above all others.

“The number-one rule that I give the kids during the camp is to have fun,” Arney said. “The kids are learning while they are having fun, but they don’t know they’re learning.”

Every day this week, more than 500 Cub Scouts from all over Shelby County gathered at the state park to participate in several different activities, games and workshops designed to help them learn more about scouting values and become more self-sufficient young men.

Each day, the morning camp offered activities for kids in grades one through three, and the afternoon and evening session catered to older Webelos scouts in grades four and five.

“Our main saying is ‘Keep the outing in scouting.’ We get them outside and away from television and video games,” Arney said.

During the June 8 camp, the Cub Scouts took part in arts and crafts classes, such as building a bird feeder, learned about crime scene investigation, shot BB guns and bows and arrows and participated in several other outdoor activities. 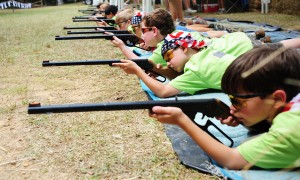 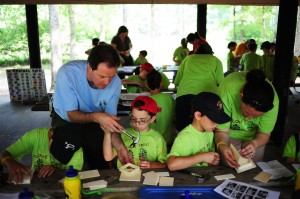 Because the camp is held each year right after the scouts become eligible for the next level of scouting, it helps the kids get a jump on badges and other requirements to move up in their Cub Scout rank, Arney said.

“It gives the boys the opportunity to get a jump start on their next rank badge,” Arney said. “We just give them a chance to do scout-oriented things they wouldn’t be able to do anywhere else and make sure they have fun doing it.”

Most of the first-grade scouts at the camp had been involved in scouting for only seven days before they came to the state park, and many of the third-grade scouts had been coming to the camp for years.

“It teaches him to work well with a group. It also teaches him leadership skills and how to be an overall better citizen,” said Chelsea resident Michelle Griswold, whose son was participating in an arts and crafts session.

A few minutes later, a group of about six scouts excitedly ran to Griswold and Arney to display a small green caterpillar they found near the pavilion.

Even though the camp is geared toward the young scouts, it also serves as a learning experience for those who lead them all week, said camp den leader Michael Bobo.

“I’ve learned how to lead a little better,” said Bobo, who has been volunteering at the camp for more than four years. “From doing it year after year, I’ve also come up with different ways to keep the boys motivated all week.”

To learn more about the camp, or the Greater Alabama Council of the Boy Scouts of America, visit 1bsa.org.