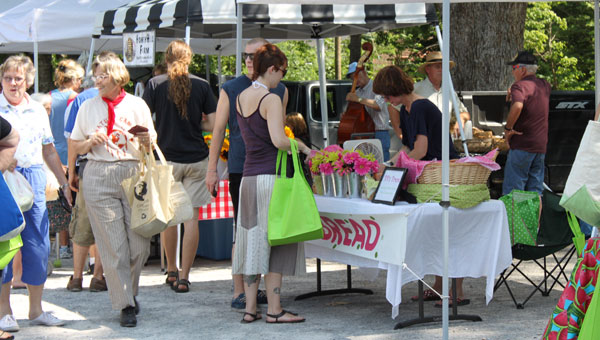 Neighbors chat next to rows of tables laden with vibrant vegetables and other farmers market treats in communities all over Shelby County.

Mt Laurel’s farmers market kicked off Saturday, June 4 from 8 a.m. to noon, and will run through October.

Sasha Johns, wife of Mt Laurel’s chiropractor, said she and her family moved to Mt Laurel in the fall. She now contributes to the farmers market by selling Amish cheese from cows that haven’t been treated with antibiotics or hormones.

She also said she likes to make jelly and can produce. Instead of competing with other jelly-makers in the farmers market, though, she creates wine jellies.

“Instead of fruit juice, you use wine to make the jelly,” Johns said. “It’s not your average peanut butter and jelly.”

Johns said she uses the wine jelly as a glaze for meats or even adds the sangria jelly to her vanilla ice cream.

Robert and Sandra Armstrong of R&S Farms outside Columbiana said it’s a few weeks early for an abundance of ripe produce because of a long winter.

“When you plant a lot of produce, you’ve got to do something with it,” Robert said. “Stuff is coming in little by little.”

In the coming weeks, the Armstrongs plan to bring zucchini, peppers and, in the fall, heirloom pumpkins. 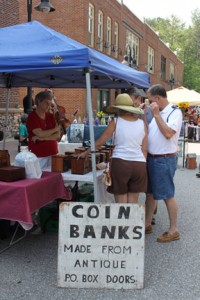 The Montevallo’s farmers market began Monday, June 6 from 3-6 p.m. and will run until August 8 in the lot behind First Baptist Church on Main Street. On opening day, the market held fresh produce from both Shelby and Chilton Counties, along with fresh bread and icy snow cones.

“I baked 89 loaves last night,” Scott said. “I’ve made 166 tops. One day, I may have a green and pink bakery, because dreams do come true. Life’s too short not to eat bread. You’re not living if you’re not eating bread and butter.”

Joyce Darby of Darby Farms in Montevallo is a certified organic farmer looking for ways to serve her community. She brings herbs and produce to the farmers market, and has teamed up with CSA, Community Supported Agriculture, to deliver vegetables on a weekly basis to local citizens.

“We’re an educational farm,” Darby said, “and we’re hoping to get involved with the kids in the schools. We want them to see where an egg comes from or how a tomato grows.”